More than 200 people in 27 states are being monitored for possible exposure to monkeypox after they had contact with an individual who contracted the disease in Nigeria before traveling to the United States this month, according to the Centers for Disease Control and Prevention. To date, no additional cases have been detected.

State and local health authorities are working with the CDC to identify and assess the individuals, and follow up with them daily until late this month, said Andrea McCollum, who leads the poxvirus epidemiology unit at the agency’s National Center for Emerging and Zoonotic Infectious Diseases.

“It is a lot of people,” McCollum acknowledged.

The efforts stem from the discovery that a U.S. resident infected with monkeypox traveled from Lagos, Nigeria, on an overnight flight to Atlanta that arrived on July 9; the person then traveled the same day to Dallas. On July 15, the individual sought care at a Dallas hospital emergency room, where the diagnosis of monkeypox was made.

The people being monitored include a number who sat within 6 feet of the infected individual on the Lagos to Atlanta flight; others who used the mid-cabin bathroom on that flight; airline workers who cleaned the bathroom after the flight; flight attendants; and some family members who had contact with the individual in Dallas.

“We define indirect contact as being within 6 feet of the patient in the absence of an N-95 or any filtering respirator for greater than or equal to three hours,” she said.

Monkeypox is caused by a virus that is related to smallpox, the only human virus to have been eradicated. It causes less severe illness than smallpox, but is still quite dangerous. The CDC said that the fatality rate for the strain of monkeypox seen in the Dallas case is about 10%.

Monkeypox is rarely seen in people. There was a large outbreak in the U.S. in 2003, when a shipment of animals from Ghana contained several rodents and other small mammals that were infected with the virus; 47 confirmed and probable cases were reported in five states. The outbreak was the first time human cases of monkeypox were reported outside of Africa.

In the past few years, Nigeria has seen an uptick of monkeypox cases and seven exported cases have now been detected: four in the United Kingdom and one in Singapore, Israel, and the United States. In the U.K., a local health care worker was infected after having unprotected contact with the patient.

Monkeypox was first discovered in 1958 when two outbreaks of a pox-like disease occurred in colonies of monkeys kept for research, hence the name ‘monkeypox.’ The first human case of monkeypox was recorded in 1970 in the Democratic Republic of Congo during a period of intensified effort to eliminate smallpox. Since then monkeypox has been reported in humans in other central and western African countries. 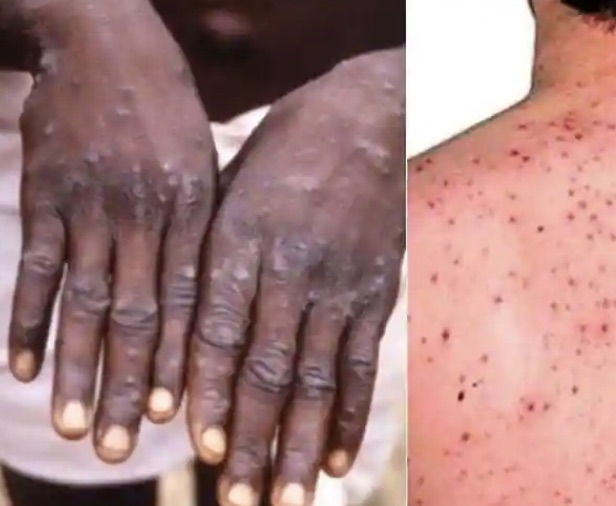 Hunter Biden might have monkey pox. His paintings look as if they were drawn by monkeys on meth.

The article linked to this doesn’t list the 27 states where people are being monitored, which they really should have included

commiesKeep the borders open, maybe the elites, the Commies and the criminal fbi will get these diseases and die.

This invasion has got to stop. It’s not just serious diseases comming in. It’s an invasion that will result o totalitarianism, communism, destination of Americans When is enough enough? The illegal coup Xiden administration needs to be prosecuted for crimes against Americans.

One thing is for certain, no more ideas or scientific discovery’s. Screw the monkey pox crowd and all the illegals along with the elites.

“The law of unintended consequences” – the “bleeding hearts” are letting in illegal immigrants who may have TB, etc. without checking them. What could possibly go wrong?! This disease and others may cascade through poor immigrant and AFAM communities devastating the very people they “want to help” – wrong, the only people these Dim politicians want to help is themselves through illegal votes and a permanent client state in abject slavery. Personally, I have been waiting for Ebola (85% death rate untreated) since 2007 when I thought terrorists would self-infect and bring it here. Terrorists! We don’t need no stinking terrorists! The USG will let if happen! Now, I wonder why? Do they want to cancel the next election, something not even done in 1944 or 1864?

Such a racist name

Our greatest strength in our diversity. With so much disease, we’ll achieve complete immunity from everything!

Ah, increasing diversity. Bringing back the diversity of diseases too.

Multiculturalism is a total failure.

VAERS reporting (under penalty of perjury) is now showing the deaths from the Covid Vaccine far exceed all deaths from their fake “covid” too….. so there you go

Just keep on importing crap to this country. We will be soon a third world shit h..like those!

Remember the ebola outbreak in Africa where Obama insisted on flying back American victims to the US for treatment.
I always felt he was hoping to trigger an epidemic here, but it failed

THANK YOU ILLIGIT 46 , HOW YOU CAN SHOW YOUR FACE IN PUBLIC IS DESPICABLE. AND THE DR.GOD FOUCHI .NOT ONLY FORECAST THIS PANDEMIC, HE MADE IT HAPPEN .TO THE SOCIALISM CACKLE MISFIT,NEVER,NEVER,NEVER. WILL A SOCIALIST BITCH INHABIT THE WHITE HOUSE. ITS BAD ENOUGH WE HAVE A PUPPET OF CHINA THERE NOW.WE HAVEN’T FORGOTTEN SHIFTY SHIFT,LIEING TO CONGRESS,PRISON TIME.AND NANCY ! WE NEED TO DO SOMETHING FOR YOU AS WELL.
YOUR JUST SO DESPICABLE. WHAT A F C KED
UP MESS WE HAVE NOW.THE Handel has been pushed. The vortex is rotating, and soon we will be like all the rest.
Looking for a place to live.

When I first heard this story I thought it was a joke. Monkey pox would means black people virus if you put it on Twitter.

They mean smallpox eradicated in civil nations. Not the world. Right? Cause I heard it’s coming back over the border now.

Any deaths are on the hands of this incompetent administration. They are the ones responsible for this by letting in over 2 million illegals. They just keep proving they DONOT care what so ever for the American people

Shut up and get the jab. And pay your taxes. _Joe Biden.

Time to put breathable tissue on your face. Fauci said so, so it muust be true. Posting for a friend.

I thought this was a joke!

Thanks for the laugh, needed that! 🤣🤣🤣

I see a trend. Diseases from other parts of the world come to the US and cause outbreaks but you never hear of anything from the US going somewhere else. We really need to rethink this whole vaccination strategy.

Why can’t we keep these F’ing people out of our country???

Because of this incompetent admistration that does not care one bit for the American people what so ever.

Remember when every year you’d see ads for OTC products to take for relief during ‘cold and flu season’?

“Covid-19 is not as effective as a scare tactic now; we gotta introduce something to maintain control Bring on the lab-bred Monkey Pox, NOW!! BTW, we can say the VAX will probably be more coefficient to fight this pox if we propagandize them into it.” (CDC, et al.)

I SAY A POX ON YOU AND ON YOUR HOUSE DEMOCRATS!!!

Elections do have consequences.

Protect Fauci, until he talks. Inject Lysol directly into his veins … a pint should be enough.

All of a sudden the flu and West Nile virus have disappeared.

They only have time to release a few pathogens per year. The flu was practice on how to disperse it

It’s not about the disease(s), it’s about the vaccine(s) – the real killers.

But they all had the magical masks on when in the plane.

Oh that Joe, Hoe and the rest of the thieves contract this pox and die!
The commie bastards!

“The first human case of monkeypox was recorded in 1970 in the Democratic Republic of Congo during a period of intensified effort to eliminate smallpox.” If I remember correctly, isn’t this the location of one of the US’s BSL4 biological weapons lab, which was also the source of ebola???? Just thinking.

Was Fauci working there then?

All this proves to me is that our current govt, led by the NWO, Deep State and Obama, want us dead.

I’m guessing Obama and the NWO are going to release new diseases on us until they meet their NWO goals. Their #1 goal is the eradication of white patriots.

a) Is this a true story how it came in?
b) If it is true, was the person really a traveler or an illegal alien invader?
c) Is this the second part of the Covid bioweapon?
1. Part 1 the ‘Covid-19 virus’.
2. Part 2 the mRNA or spike protein containing medical devices.
3. Part 3 the planned ‘other shoe dropping’ that kills everyone who got the immune system weakening ‘shot(s)’, setting them up for among a list of health problems, cytokine storm death.

Is this what is going to KILL every fool who got ‘vaccinated’ to ‘help us get through this’?

It is now known that “Gain of Function” research is also being performed in two states within America besides what is being done in Wuhan, China. Why did Dr. Anthony “The Weasel” Fauci, Francis Collins & Peter Daszak “slip” behind President Obama & Trumps backs $3.7 million to the Communist Chinese in Wuhan to continue this virology experiments which later killed over 4 million humans?

So the symptoms are what? You jump around like a monkey, scratch your keister and blindly fling poo at everyone in sight? That’s the democratic platform..

Hmmm, aids started with a homo having literal wild monkey sex…sure, right. Had nothing to do with fauci.