Justice Alito responds to the dissent: "Although Heller concerned the possession of a handgun in the home, the key point that we decided was that “the people,” not just members of the “militia,” have the right to use a firearm to defend themselves."

UPDATE — Katie Pavlich has a very good writeup on this story…

Holy moly, Justice Alito filed a concurring opinion in the New York concealed carry case in which he just got a fat shit all over Stephen Breyer's dissent.

Alito's response to Breyer: "How does the dissent account for the fact that one of the mass shootings near the top of its list took place in Buffalo? The New York law at issue in this case obviously did not stop that perpetrator." pic.twitter.com/76hREWsG8B

Read the piece from Katie Pavlich… 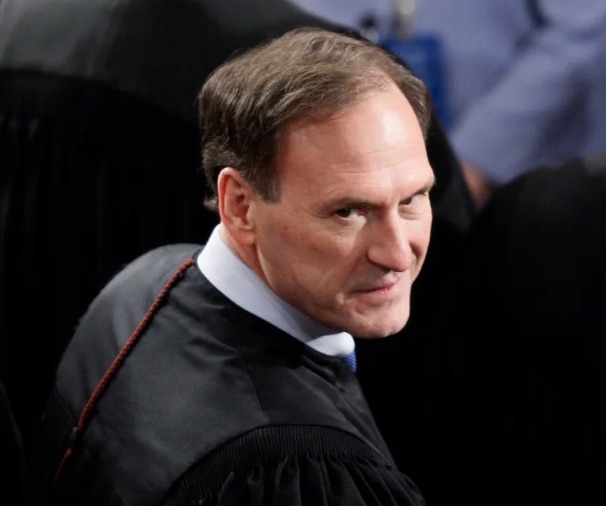 Militias were comprised of every abled bodied boy or man in a town, village or city grabbing their gun and joining together in it’s defense. The 2nd amendment recognizes the right of the individual citizen to keep and bear arms for defense and denies government any authority to deny the citizen that right

the militia in 18th century terms..is every able bodied citizen

Only thing Alito got wrong was “licensed adults.” 2A saus nothing about a license, which is just another government registry/choke-point.

The only thing GW did right was this nomination.

So, when you defund the police, then people are left to their own devices to deal with the criminal element, and even though canadian govt. turdhoe doesn’t think you should be legally empowered to drop the hammer to stop a crime against your person or household, well that’s when you’re glad you’re in america, and he’s in canada. Because the world has criminals in it and they would gladly deprive you of life liberty and property without due process. And, ‘when seconds count, police are only minutes away’, and in some jurisdictions they’re now phoning it in to save fuel. In other jurisdictions, they’re just quitting/retiring/looking for work someplace else. In other news, new yorkers got their full unfettered gun rights. Be an interesting year…

Note how every disappointing ruling by Roberts and the lefties is awash in technicalities and meticulous details that make unique exceptions their rationale for obtuse rulings.

But here, they are conspicuously ignorant and rely on generalizations and un-related facts in their historic dissent. Hypocrisy or ignorance? Who knows?

it’s revulsion of the Constitutional Republic itself and not just hostility, they’re Marxists in sheep’s clothing

Occasionally “the people” win one. Thank you founding fathers for your vision.

ROTFLMFAO, this is how to bitch slap a liberal POS
excellent work Justice Alito

Score 1 for the bitter clingers! Take that Oblamo.

The leftist red flags failed to over turn gun laws. They thought by orchestrating mass murders that the SCOTUS judges would ignore the US CONSTITUTION. They failed miserably. American and its founding fathers are sleeping well knowing our right to arm ourselves is still protected from government corruption.

Never a Constitutional right. Too bad that Civics 101 is not taught anymore. Then dissenters would know that abortion is not in the Constitution AT ALL. But if you want it to be, there is an constitutional amendment process to follow. SCOTUS just handed back the responsibility to decide BACK to the states where it was originally held. The 10th Amendment prevails!!

Too funny, ALL body autonomy is simply just common sense. The RIGHT to bear Arms is a RIGHT… the right to decide to vax or refuse forced vac is also a body autonomy thing… same with a woman owning her entire body first and entirely. #PersuasionNeverLegislation!

Her own body – yes; not the body of another human being.

What about the right of the child?

Not disagreeing with your statement but, what does this have to do with the 2nd amendment?

Yes it is. Welcome to the club.

It’s amazing that Roberts joined the majority on this historic decision.

After all, the Deep State has dirt on Roberts that he’s a closeted gay paedophile, which explains his many bizarre twisted rulings.

“And while the dissent seemingly thinks that the ubiquity of guns and our country’s high level of gun violence provide reasons for sustaining the New York law, the dissent appears not to understand that it is these very facts that cause law-abiding citizens to feel the need to carry a gun for self-defense.”

“And while the dissent seemingly thinks that the ubiquity of guns and our country’s high level of gun violence provide reasons for sustaining the New York law, the dissent appears not to understand that it is these very facts that cause law-abiding citizens to feel the need to carry a gun for self-defense.”

A Supreme Court Justice’s vote was based on his feelings, not by interpeting he US Constitution. Dangerous move.

Nothing new. That is what all lefties do. To hell with laws and principles, we want our way!

Hate to say it but, even the 6 majority justice’s ignore the constitution. ANY law or regulation on guns is unconstitutional. In their opinion, they they say New York’s regulations are too “open ended” and therefore unconstitutional. What part of SHALL NOT BE INFRINGED don’t they understand.

I’m happy they struck the law down and, I” take it but, their reasoning leaves a LOT to be desired!

Where is abortion an enumerated right in the Constitution? I’ll wait for your response.

It isn’t but, what does that have to do with the 2nd Amendment?

Alito is my favorite Justice.

Clarence Thomas is mine.

Breyer needs Sotomayer to dress him so he doesn’t put his robes on backwards.

Sotomayor needs to suck on a gun barrel!

She looks like a lavadora. Probably does all the washing too.

Let’s just make murder illegal, then all problems will be solved. When did our government decide that Americans are more of an enemy than people actually committing crimes like millions coming here whose very first act, (entering USA) is a crime?

Let’s ban cars next as they seemingly have become weapons of mass murder against people in crowds or parades.

To paraphrase Dr. Thomas Sowell: If the criminals ignore the laws against murder, what makes the dims think they’d obey gun laws?

Sullivan law. That’s how all this got started a hundred years ago. The point was New York didn’t want the Irish carrying pistols to defend themselves from gangs.

Makes you wonder if radical leftie Breyer was the abortion leaker. He’s retiring, and knows that the media and Dems will cover up and protect whoever did it. How’s that John Robert’s investigation going? They covered up Deep Throat in Watergate for 30 years until FBI Ass’t Director Mark Felt confessed from his death bed! They have no shame.

Good point! What has happened to the John Roberts investigation of the leaker? Just went poof👎

Whoever did it released the abortion info in person or used a burner phone so it could not be tracked back. These are smart people. Roberts main job is to protect the integrity of the Court. This leak would forever tarnish the court’s reputation, He cannot have that happen. It will never come out!

The left is clueless, you get a background check when you buy a firearm, then the process repeats itself when you get a permit. The law breakers never got background checks, they buy or steal their weapons on the street, and then WITHOUT a permit they carry concealed. But I am sure these new laws will make them come around and follow the rules….idiots…..

Thank you Justice Alito. Please keep the greatest country as it was intended.

Alito had to educate Breyer that by definition CRIMINALS DON’T FOLLOW THE LAW. Breyer quoting all the stats didn’t even realize he was making the case for the majority opinion. Well played Justice Alito!

2A is the most important check and balance there is. The glue that holds the rest of the amendments together 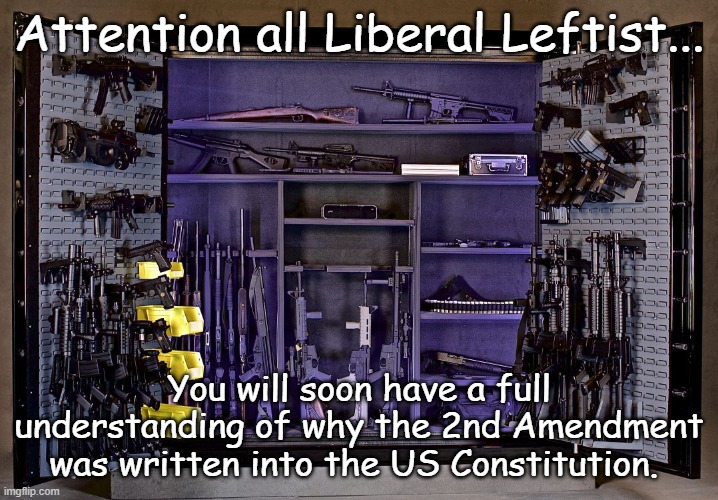 If they haven’t figured out that the jab is accelerating cancers and killing young people, not sure they will recognize socialized communism.

Breyer: “This is the smartest argument I have.”
Alito: “Don’t worry. There’s someone dumber than you as your replacement. Get out of here.”

I don’t know, KJB is going to be a real treat. If she follows the course all of the other Biden hires have taken, she will make Breyer look like a genius.

Wow, what a good response to Breyer’s dissent. Thanks Alito!

Joe Biden speaking without a teleprompter was heard to say, “this ruling will make it much harder for government to disarm Americans badakathcare.”

You can read the comments on Townhall, you just can’t make comments.

Thank you Justice Alito!! And much thanks to Justice Clarence Thomas. Thomas has become my favorite Justice since losing Justice Scalia.

How does someone like Alito have a license to practice law? How can someone in his position be so removed from logic? Emotional decision making has no place in the courtroom.

While your emotionally driven pearl clutching argument might sway a two year old (or the obsessive Netflix watcher), it just reminds the rest of us of the stupid vomited up on us all daily that is supposed to pass for intelligent discourse.

It’s illogical that the New York law would not have stopped the Buffalo shooter? Explain that, we’ll stand by.

You are unable to comprehend the issue around guns and crazy people who sometimes use them. It’s leftist clowns such as yourself who sometimes are that crazy person. Most of the mass shooters are leftists.

Excellent post ……….only if you are being sarcastic. Otherwise seek help.

it is clear you do not understand the difference between emotion and logic. People like you are dangerous.

Did you mix up the judges?

I REALLY hope that was it, Pepper.

How was someone like you not aborted? If your best contribution to society is your wish that criminals dictate to the law abiding, then you are universally considered a liability to the rest of us.

Emotional decision making had no place in the back seat of the cab you were conceived in.