Meltdown for the ages… Glorious tears from democrat… |

Meltdown for the ages… Glorious tears from democrat…

“The religious right are responsible for the high gas prices.” She gets her information from @RBReich… pic.twitter.com/sM3war3Sx3 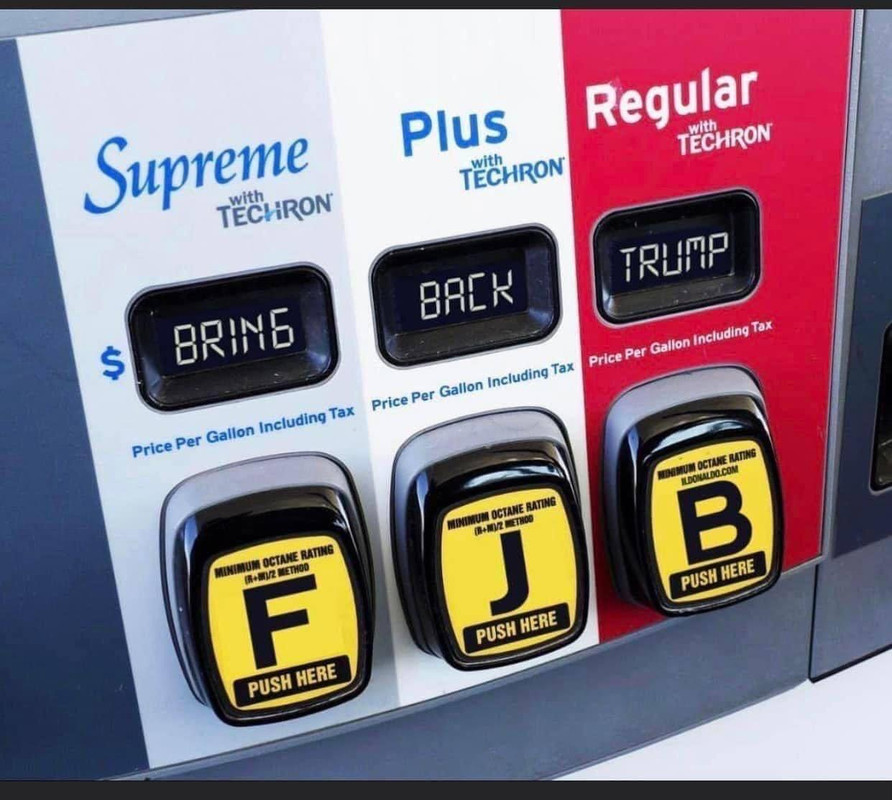 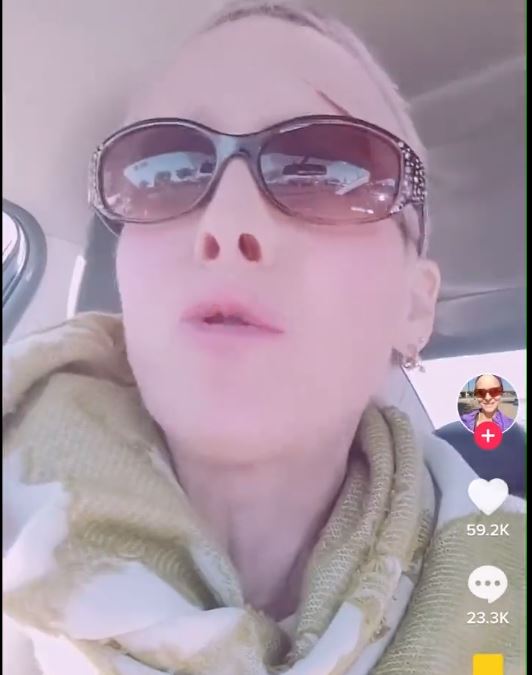 Here she is. Without makeup. 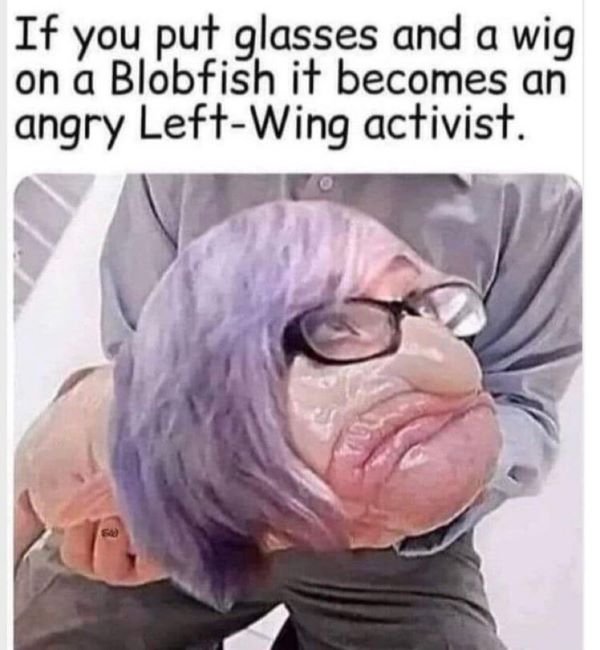 Glad I am not married to her, caus at some point you’re going to want to have a conversation with her.

Save Baby Yoda from Groomers

What an absolute idiot. Wish people like her were a rarity and never made their way to the oval office, but they did.

Since when did the religious right take over the government?
Another Useful Idiot……but dangerous

Hey lady, have you looked at your property tax or income tax bills lately? At $6/gallon, I’ll spend about $3k a year on gas. Meanwhile, the property tax on my exceptionally modest house is $4k, for NOTHING, and the income tax that I pay to get Covid mandates, open borders, food shortages, a military more concerned about pregnancy flight suits and homosexual indoctrination than WINNING — and pretty much nothing else — is around *$15k*. So yeah, on the big scale of things, until gas prices hit $25/gallon, your angst is a bit ironic.

What’s that thing on her forehead? Did she lose an eyebrow on the left side to glue failure, while the one on the right side is slipping off?

Geez, wait till she finds out about the great worldwide tampoon shortage! she’s already only hanging on to reality by one fake fingernail!

I think she’s been lied to by Robert Reich.

Robert Reich has been practicing that in a mirror for decades. He believes everything he thinks, now. Not hard to convince a feeble-brained “follower.”

The left is unhinged.

Yell it a little louder, maybe someone will hear your angry ranting.

Well lady enjoy your prices from the president you voted for when you listened to the that socialist Robert Reich. You should be happy to have any gas at all since Robert Reich wants to end all fossil fuels.

She got what she voted for. You just can’t please some people.

Well, that was enlightening.

I’ll mail you a bible if you want one.Shes doesn’t have a clue about the religious right or what we believe.Bet she knows about all the trash in the secular world.

She’s broke and starving but probably paid more than she’s worth.

Profound asinine ignorance. How does this come to happen.

She seems highly edumacated. Like ALL leftists. The edumacators don’t even try to hide it anymore. Robert Reich is another arrogant runt like Fauci.

The dumbest, and most ignorant class of people are leftists. There are dummies on the right too to be fair, but nothing close to this retardation.

She is proof that idiots can still get driver licenses, but with her intelligence she should be only allowed to ride bikes.

Bet she’s more than willing to ‘save’ the planet with solar panels and windmills. Pity she’s unwilling to pay the price. Can’t connect the dots.

Oh my….this lady is not only a dip-shit, she’s stupid.

She has a right to be pissed! But I doubt if the religious right people had anything to do with this? It was
those that cheated in the last election she should be barking at!

you doubt??!!??… you doubt religious right is at fault for hi gas prices??… that’s rich Diane… the thing babbling in video is a loon, totally f’nn crazed and above all, a leftist stinking tool… yes, they do smell

Fuel is like Air. Without it we all die.

I feel the same way when I go to the pump, but it was Joe Biden, and the Green new deal!!!! She needs to spend 60,000 instead on an electric car, but if she is struggling with 100 dollars, that might not be a possibility. Oops I guess the Leftist, forgot about that point of putting the cart before the horse! OH ya, and all our trucks that ship everything are mostly Doesel power, Why are prices going up.? They need to get there somehow? Idiots!

I hate women who think that people will listen if they yell like a psychopath until they’re spitting all over the place. It’s kind of gross.

Lol. Methinks she needs another clot shot. She seems to calm, rational and human to me.

EVs make up less 1% of vehicles and Joe’s going to convert all gas powered vehicles during his term (however long that lasts)?

She is an idiot.

Does anyone know who she is??

Where the F is this person getting her news and info? The “religious right” is why gas prices are too high? Could have something to do with Biden’s stupidity in trying to shut down the fossil fuel industry, but “religious right”? No way!

1) Everyone I know on the religious right (including myself) blames high fuel prices primarily on Biden’s war on domestic production and see reversing that as the single most helpful thing that would help our domestic issues right now.

2) In 2009, I started driving VW diesels which get 35-50 mpg. I’ve kept driving them, even when fuel prices dropped under Trump, because I suspected they would go back up. Besides, they are great cars! From the look of the video, this lady drives an SUV. She could have chosen a thrifty vehicle that wouldn’t cost so much to drive.

Biden’s message to her is to just go out & buy an electric vehicle.

But some drugs will slow it down and make it less incoherent! Hope she don’t have children.

Is that a gash above her eye, or a bad eyebrow tattoo? Maybe a good blow to her head has her talking this nonsense. If anybody gets hit in the head hard enough, they’ll probably start drooling and sounding like a Democrat.

By far, the most dangerous people in the world are liberal women!

This poorly educated moron explains how democrats keep winning any election w terrible policies. She has no common sense and obviously can’t think for herself. Should she really be driving a car w such limited cognitive abilities?

One of the stupid Commie fool tools that have been duped into thinking that (religious) right equals fascism:

There are only a couple Communist Countries left; North Korea, and Venezuela (sort of,) etc. All the rest are Communists in name only who have gone fascist.

What does religion have to do with it? Vilifying the western sense of morality based on Judeo-Christian notions of balanced justice, equality, tolerance, free will, mercy, in favor of state morality of compliance, state manipulated self-forced manufacture of consent to manipulated and coerced group values and ethics; Using tools like finding a religious zealotry straw-man psychology of abortion being sacred. (Is it those Jew and Christian bankers? Should they be put into concentration camps? Forced to wear David Stars or Crosses?)

Your “Green New Deal”. And your “crash the system ~~~Saul Alinsky” approach to facilitate “Build Back Better.” Shutting down coal plants, shutting down drilling, dumping money into the military industrial complex and foreign wars, paying people not to work, shutting off California farmers water that’s causing prices to go up. But what did you think would happen? Magical thinking utopia based on your superior sense of self-worth, righteousness and good intentions?

Bitchy ignorant Flibbertigibbetry is frustratingly endearing in a teenage girl, but pathetic, in a hag cakeing on the makeup trying to look younger than her age, and ranting against the people who tried to prevent this shit as the “secret vast right wing conspiracy” who slandered your good intentions then secretly made happen the otherwise obvious and inevitable consequences of your actions; ruining the magical result you were expecting.

“CEOs do not deserve to make more than 300x what I make!”
I beg to differ.

She does have a point about the CEO pay. Cronyism has really given capitalism a bad name and it partly responsible for the rise of socialism in the U.S.!