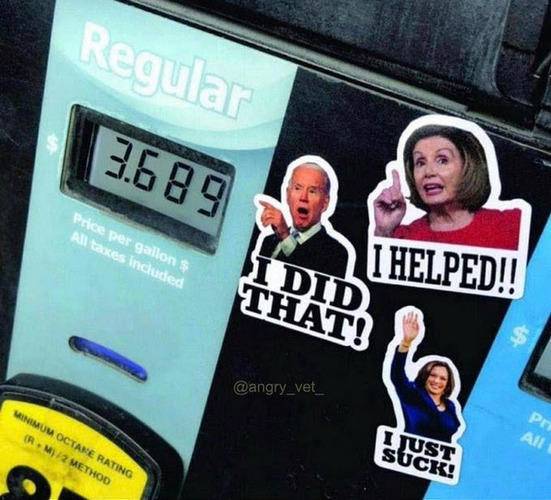 It’s no secret that Americans are paying record prices at the gas pumps. Rapidly ascending prices also affect the cost of all the goods and services that are an integral part of the American economy. Farmers, manufacturers, delivery companies, repair people…you name it: They’re paying more to do their jobs and they’re passing those costs to consumers. So why now, of all times, is the Biden administration selling off America’s Strategic Petroleum Reserve (“SPR”) to Asia.

As the name suggests, the SPR is America’s emergency backup supply of oil. The reason we have it is because of the energy crisis in the early 1970s. According to Wikipedia, which is probably accurate about this, “The United States started the petroleum reserve in 1975 after oil supplies were interrupted during the 1973-1974 oil embargo, to mitigate future supply disruptions.”

Fast forward to 2021. Upon entering the Oval Office, one of the first things Biden did was to shut down the Keystone XL pipeline. Henceforth, rather than flowing safely through a pipeline, Canadian oil will come the expensive way, over land, whether in trucks (which are in short supply) or on trains.

At the same time, Biden halted new oil, gas, and coal leases on federal lands, something that’s being fought in the courts. As long as the suit continues, though, no sane business would start to drill.

Biden’s also on the verge of ending all new oil and gas leases around major Native American cultural sites, which will shut down massive amounts of exploration and drilling in New Mexico. And following initial denials, the administration admitted that it plans to close a major Michigan pipeline.

About 1.6 million barrels of crude from the U.S. Strategic Petroleum Reserve — a monthly record — was shipped out in October, according to data from market intelligence firm Kpler.

All three supertankers went to Asia.

“Given the ongoing pace of the current SPR release — 12 million barrels in the last two months and the biggest weekly release so far last week at 3.1 million barrels — it’s fair to assume more SPR barrels are going to leave U.S. shores in the weeks ahead,” said Matt Smith, an oil analyst at Kpler.

As far as I can tell, the administration has not explained why, with Americans struggling to keep up with rising fuel prices, it’s shipping our SPR to Asia. During the virtual meeting between Biden and Xi Jinping, the two men allegedly discussed releasing oil from both countries’ petroleum reserves but made no mention of the sales to Asia that already took place.

There is a key word in “Strategic Petroleum Reserve” – can you tell which it is, and what it means?

Get this guy another clot shot. Two or three if needed.

reserve a cell for him tn GITMO BAY

Calling treason but refusing to do anything. Pathetic. Let them destroy all we have worked for……unAmerican. Sit back, you deserve what you get. Do nothing to stop evil? BTW, alternative sources of energy will inevitably be coming online in the future, you don’t have to force it. Do something…..

That is Treason! China is a communist Country.

Begs for more oil from OPEC while selling our strategic reserves? WTF
That should be enough right their to remove him from office
camel toe will go catatonic if she is becomes president and her self immobilisation will help America to become free of the democratic socialist regime

Vote Republican at all levels in 2022.

And we sit and do nothing while these pig f’cks destroy the country.

We have someone in our White House who is bent on destroying our access to oil, ruining our transportation system, healthcare, border security and guaranteed freedoms in our Bill of Rights. Does he care about the American people at all? Did he take the oath of office and understand what he was saying?

How do we get this informaation to the American people! It should be broadcast loudly!

Gasoline and heating oil will be the next crisis. This will freeze people and keep us home. What a MF.

Guess Hunter Biden continues to provide more than just paintings. THIS SALE, or any other from our reserves should ILLEGAL, so much to fight like Washington did, AGAINST tyranny and the ENEMIES in our midst.

Remember how the Dems criticized Trump’s daughter for her clothing line. And now they approve of all Biden’s so called deals.

Yes, Republicans, open your freaking mouths about this! Haven’t heard a peep.

Giving an eight hour speech during the night, for some reason, instead of representing us.

I heard articles of impeachment being read, still waiting on further info. This administration is failing in many ways. Pure senior abuse to obtain exponential monies apparently orchestrated by wealthy system manipulators roughly headquartered in California. Biden should be in a nursing home, not the Oval Office. Own your ‘bad’, Democrats. Mega-failage here. SMH

Brandon is a Communist as are all DEMONCRATS. There is your explanation. The only questions is, why did Americans sit back and let Demoncrats steal the 2020 election?

Clue #847 that Xiden is an employee of the CCP. How many MORE clues are needed?

A different article I read on this subject said that Ben Hiden was “trying to keep the price of oil down on the global market.”

I do believe that this can be construed as giving aid and comfort to the enemy.

just another example, to bad we don’t control the house ! Far more impeachable offences than DJT ever had !!!

Don’t Tread on Me - Texas

WTF. This is an administration that is trying to destroy as much as possible before ejected from office in 2024.
Seems like forever from now. His help us.

He was put there to dismantle America.

Why is that pos selling strategic reserves to anyone?

fund. Why is she still out of jail.Hillary Clinton sold our strategic materials to Russia and kept the money for the Clinton

You left off my first sentence. Allie Matthews

Obama and Holder told him to sell it.

Does “The Big Guy” get his 10% commission on those oil sales?

Joe should find out how the Space Aliens power their UFOS, and then he would be really rich…

How can he do this? It’s outrageous!

Wow what an interesting article 👏 hope all other news outlets report on this as well. Thanks CFP.

Joe Biden is dumber than any President in the last 80 years, and the democraps love him. That pretty much tells the whole story.

And the motivation for all this is to shore up Xiden’s poll numbers.

I can hear it now. Bad news we are out of oil. Good news all affected will be eligible to pick crops. As long.as you’ve made it out of the re education camp alive.

Does any understand that oil is to provide Americans Defenses if War to break out?

JoeBama is really really really a sellout to China!
He’s sabotaging everything in America to make China stronger over us, while totally destroying us!!

In a normal world this would be considered treason.

Selling – to WHO in Asia?

My was of worthless Fiat paper says its Chyna. And at a steep discount.

This is how he is paying for all the new spending…

Nah. That spending comes from the fiat money printers. But both actions make us poorer.

Biden and his buddies are making a mint off this deal while DESTROYING US.

Biden is a traitor and should be executed.

Not playing your stupid game

What more evidence does anyone need, FJB is a traitor, so is McCorksucker, always have been.

We’re being set up to fall.

Cocaine Mitch — you worthless turd! Where are you going to hide?! McCarthy — you too!! Wtf!

Asia is a continent, not a country. Who is he selling it to, if it’s true, and where is the money going? This kind of reporting is idiotic.

Who they are selling to is a secondary issue. Selling the reserve has civil war type consequences.

Biden is a traitor. And he hates Americans.

FJB doesn’t care that America is floating on an ocean
of oil . He’s doing his CCP masters bidding … time to 8646 …

Why is the man not impeached yet or jailed for a stolen election? He has not done anything in our interest and you could say our national security is zilch. I honestly believe the son of a bitch is setting us up for an overthrow of the US.

He can’t be impeached until the GOP controls the House. In the meantime, FNPelosi has got his back.

Is there not ONE COP, not one Secret Service person with ANY integrity and balls to arrest this treasonous POS? You would be praised a hero. Stop being just a pension suck and DO SOMETHING. Cops doing nothing create a Rittenhouse vacuum. How long are those who are close to this absolute idiot gonna let this utter nonsense go on? Do any of you have kids? What world do you want them to live in?

Its deliberate, close oil, sell off oil, anything to get the supply to zero so that obama can come on TV and say, “See? I told you to buy a windmill car!!”

Thats really criminal, if anything biden should be using the reserves to increase supply which would drive prices down. Now he makes the problem WORSE, only to say later, “Gee, we could do something but we dont have any reserves left, sorry.” This is part of the overall plot to break USA to pieces, to rebuild it in a NWO image. They are itching to say “we cant drive gas cars anymore because, sorry, we have no oil! Best you buy a horse and buggy!”