A passenger with no flying experience safely landed a light aircraft at an airport in Florida after his pilot fell unconscious, in what has been described as “nothing short of a miracle.”

Remarkable audio from the cockpit showed the man telling air traffic control: “I’ve got a serious situation here. My pilot has gone incoherent and I have no idea how to fly the airplane.”

The man, who has not been identified, was a passenger on a Cessna 208 Caravan and was flying home to Florida from the Bahamas to see his pregnant wife. However, just off the coastline, about 70 miles north of their destination, the pilot suffered what is thought to be a medical emergency.

Facing a potential catastrophe, the passenger made contact with air traffic control, who asked for his position. “I have no idea,” he said. “I can see the coast of Florida in front of me.”

“Try to hold the wings level and see if you can start descending for me, the air traffic controller has heard telling the man. “Push forward on the controls and descend at a very slow rate.

“Try to follow the coast either north or southbound. We’re trying to locate you.”

This clip has the FULL air traffic audio exchange 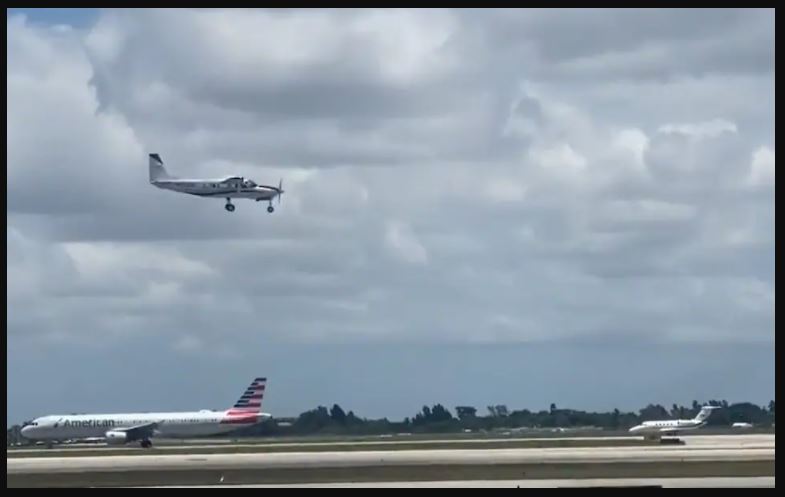 Did the pilot that passed out get the clot shots per chance?

A tile contractor for the wealthy Bahamian’s and Tourist businesses. Spent a lot of time sitting with Pilots back and forth for jobs. Maybe a flight simulator gamer. At least had some idea about flight dynamics.
They gave him a long long long and wide runway that passenger jets land on – so he had plenty of touch down room on the glide path the experts calculated for him.
The calmness and focusing while listening to a flight instructor on the cell phone was the thing the Newsroom Libtards won’t mention.

With Captain Morgan’s guidance, I’ve got in a lot of trouble.

Lesson Learned:. If a passenger on small plane take lessons from pilot BEFORE s/he passes out. Every time.

Kudos to the Air Traffic Controller who had the presence of mind to print out a copy of the cockpit for this plane to better assist the man who landed this plane and who gave the “pilot” immediate instructions on what to do first.. Very, very stressful situation.

“I said thank you for everything, and I threw the headset on the dash and said the biggest prayer I’ve ever said in my life,” he said. “That’s when all the emotions set in.”

Kudos to the controllers for their calm, coordination, and problem solving to get that plane on a cell phone and then on the ground.

that guy has definitely proven his manhood … Taliban idiots, look and learn

Great story. Looked like a great day picked for flying. Good visibility, weather. Thank God all are safe. Wondering, there was a third person in the plane. Little said about him other than he was the stricken pilot’s friend. Contribution?

Seems like a bit of a waste of his gifts.

My landing would have been without urine

I question whether he had no experience. Some of the verbiage he used is not common. At least he has played on simulators

It’s hard to fly on small planes without picking up on those details, especially if you’re an observant person. He was even trying his best to use the radio correctly. Sounds like he makes trips on small planes a lot for fishing trips.

I also wonder why this pilot went incoherent.

The brass is still clanging.

Vaccinated pilot keels over at the controls. Unvaccinated passenger saves the day.

VACCINATED for sure…WHO WANTS TO BET…?

The passenger may have had no aviation experience but clearly lots of experience dealing with life and death situations, thinking quickly on his feet and remaining calm and coherent in the face of danger. Id’ say forces or first responder, well trained and well experienced. Bravo to this man and kudos to all the aviation personnel involved. A fantastic example of grace under pressure.

Okay this guy seems to have a lot of experience . . .
I would be like, Hello, is anyone there? I’m in the white plane with one propeller . . . Yes, the white plane and I think it has a red stripe going down the side if I remember correctly.
Where am I? I’m in the air.
Well can you see a cloud puff that looks like a Chicken McNugget? I’m just to the left of this. Yes, affirmatory, LD, I mean, Lovey Dovey.

Original pilot had an aortal aneurism and although it looked like he wasn’t going to make it, he’s been released..go to the 6:00 minute mark.. https://www.youtube.com/watch?v=qbMoyWukjbs

Do they ever mention the passenger/pilot’s name?

Brandon is a Boob

I’m wagering the passenger is not a sheeple and votes right.

Not an illegal alien either.

No flaps too. Or very little flaps from what I can see. Amazing “bad ass” critical thinker is a great description.

Focus on hero, not on possible vaccine fallout.

They will try to hide if the pilot had taken the vaccine.
We know a pilot landed in Dallas and 6 minutes later had a severe heart attack. He knows it was because of the vaccine. He does not think he will ever be able to fly again.

Ground effect naturally tends to flare the aircraft, and just as you will instinctively duck your head when trying to jump up and hit your head on the ceiling, it’s very natural to pull back on the yoke just before touchdown.
Flaring isn’t a complex concept. The passenger probably already understood the idea, and ATC probably told him to pull back on the yoke when a few feet above the runway. From the radio chatter, it’s obvious that the passenger figured out the airspeed indicator, altimeter and vertical speed indicator and some of the radio lingo (although 10-4 was a bit cringe). He’s probably flown in small charter planes where the passengers have headsets. With little to no crosswind (which is rare at coastal airports), I can easily see a calm passenger landing a Caravan with ATC hand holding. They used radar to vector him for a straight in landing, managing his altitude along the way. All the passenger needed to do was make one or two adjustments to the throttle and small movements to the yoke. Landing halfway down the long Palm Beach runway wasn’t an error. That was the safest place to try to put the Caravan.

I remember something from a few lessons years ago about having carburetor heat on and throttling down to a certain rpm. Landing is what I had thought of at the time as the hardest part.

The Caravan is rated for single pilot operation. With that said, I’m guessing this wasn’t a commercial flight?

He knew what the air traffic controller was telling him. All those number. In any case Kudos for landing the plane

Thanks for that. The story made me happy for those people.

I read he is or was a flight instructor but had no experience on this particular aircraft. Still amazing he flew it with a printout of the controls.

The guy who did the instructing with no experience flying that particular plane was on the ground; the complete novice was in the air.

Well he did land halfway down the runway…..

He had experience no doubt.

This the second pilot medical incident in a week.
Getting a bit scary. Wonder if both vaccinated ?

I was thinking the same thing.

That was the FIRST thought I had too…

If he was they don’t want to say.

Exactly. The pilot in Dallas who had the heart attack 6 minutes after landing had been forced to take the vaccine and is speaking up about it. He had 200 passengers on his plane.

Whoa! That was amazing!

I have 24,000 flight hours. My wife could take a 30 minute introductory flight, and know more about flying than me.

0 take offs and 1 landing. Sure beats the other way around. I have a friend who was a military pilot who has one less landings than take offs and one ejection/parachute ride. OOPS

Every landing is just a controlled crash……

The air traffic controller apparently is a flight instructor, so HE could sign the passenger’s logbook!

Can they move that guy into the White House?

Kudos to both the air traffic controller & the passenger. Someone should make a meme of Americans saying..” We have a serious problem here OUR president is totally incoherent and he has no idea of how to lead the country”. ATC….” No Habla English”!”

The un-intuitive part of airplanes is steering with your feet when you touch down.

IMO this guy has flown some before.

Or been on enough flights to pick up the nuances of flying.

It’s more like riding a bicycle — it would be very hard to do the first time by just watching.

It’s a muscle memory thing that you have to train.

Completely agree. He rattled off altitudes and rate-of-descent like he’s done it before. That said, helluva job by the guy.

Human beings are capable of great things. Unfortunately most rather not

Driving down I75 one day a speeding car slammed into me from behind. The impact made my Sentra go into an uncontrollable spin. In those scant few seconds my most pressing thought was I want to see my wife again. The wrecker driver who took my car said he had not seen a car as badly damaged as mine and the driver still walks. Love of wife and family is a strong motivator for doing difficult things. Above all I must give thanks to God for answering my pleadings.

I don’t know about that. Sully was dead stick heavy and landed on a traffic filled Hudson.