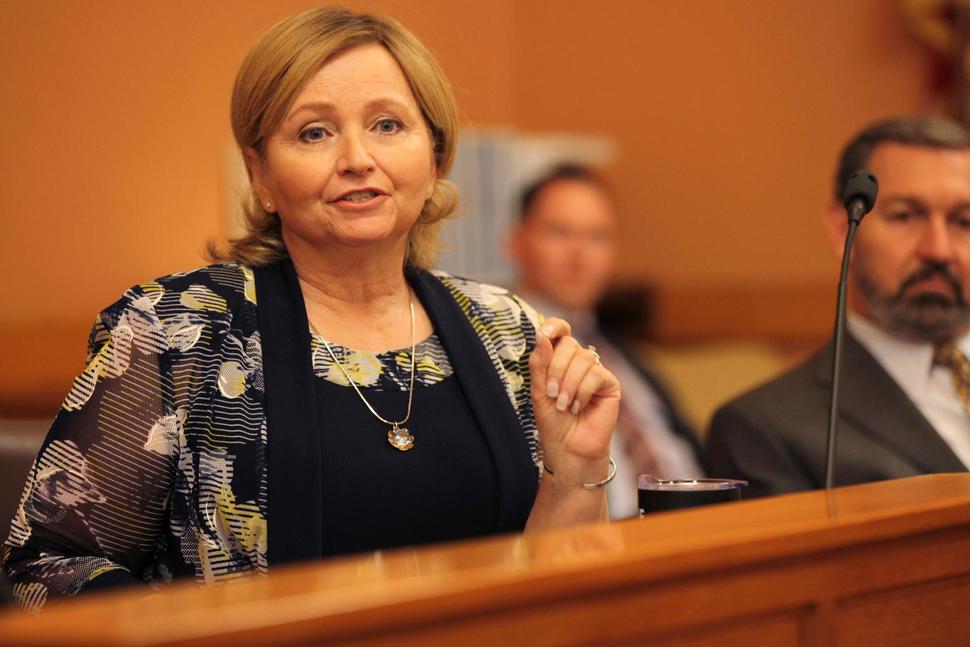 “They listened to folks back home,” House Speaker Tem Blaine Finch said of GOP lawmakers. “It’s because of, really, the grassroots in their communities telling them, ‘Hey, this is important to us.’”

But Senate Minority Leader Dinah Sykes, a Lenexa Democrat, derided the “veto override-a-rama.” “Today leaves no doubt: The Kansas Legislature is more extreme than ever,” she said in a statement.

The Legislature overrode Kelly’s veto of a bill that would create a special concealed carry permit for 18-, 19- and 20-year-olds, and that’s a major victory for gun-rights advocates. The state already allows people 21 and older to carry concealed guns without a permit and adults can carry them openly, but Kelly’s election had advocates of tougher gun laws hoping for a roll back of Kansas’ generally loose policies.

The votes were 84-39 in the House and 31-8 in the Senate. The measure also expands Kansas’ recognition of other states’ concealed carry permits.

Republicans overturned Kelly’s veto of an elections bill making it harder for individuals and groups to collect absentee ballots and deliver them for voters.

House Bill 2183 focuses largely on mail-in voting. It limits who is permitted to return a mail-in ballot for another person and makes it a misdemeanor for one person to return more than 10 mail-in ballots. The measure also requires the signature on a mail ballot to match the signature election officials have on file, creating a potential for votes to be discarded, and bans the Secretary of State from extending mail-in vote deadlines.

The bill also makes it illegal to backdate a postmark on a ballot and bars election offices from accepting money from any entity other than the state for administering elections.

GOP lawmakers said they are preventing fraud, arguing that the more people who handle absentee ballots, the more likely those ballots are to go missing or be altered. “Having someone cherry pick whose ballot gets picked up and turned in is not appropriate,” Finch said.

common sense does work; let’s all get on board

Wow – so many Democrats opposed to common sense laws on election integrity. Are they worried that they won’t get to cheat again?

Who will stop the unauthorized cheaters from changing election laws next time?Nobody stopped them this time & SCOTUS hacks does not want any evidence.

KS has always had a Republican Governor until now.
This unknown POS liberal lesbian ran against Kris Kobach, who should’ve won in a landslide.
Pretty sure the voting machines had a say-so in getting her into office

Not true. Unfortunately, we had Kathleen Sebelius…you know, the one who went on to completely F-up the ACA roll-out? Yeah, not a great moment in KS history – either here stint as governor OR what she unleashed on America.

the governor vetoed the bill because she can’t win without cheating.

About Time Kansas a proud State that stands against the crazy LEFT BULL SHIT.

I’m so PROUD of my home state! I never thought we’d get another Democrat Governor in the rest of my lifetime, but it happened! I doubt it will ever happen again.

Why does this state have a commie governor?

KC Topeka and Wichita, that’s why. Don’t worry, she’ll be replaced next go around

Liberals have moved to and created one of the largest counties in the suburbs. They came from the coasts & Denver and brought their nonsense with them. They are so stupid they can’t see that they are creating the chaos they were fleeing.

A lot of them sneak in while republicans do not like their own hand picked candidate who may be perceived as worse.

Our country has major problems if a state like Kansas elected a democrat governor. Shameful.

She never gets anything to stick. We have a republican legislature that turns everything back on her. Her mask mandate was never enforced. All but 3 counties told her to go pound sand. The only ones that did were where the big cities were. She’s from NY and tried to implement NY ways here but we the people of Kansas, trained her with our Midwest ways. She’s a dud

Wonderful news! Common Sense is alive and well in the Kansas Legislature… Kudos!

Now those are Americans taking a big ole steamer on the head of a commie pos Governor! Please keep it up!!!!

The ballot harvesting law is a true victory.

I’m willing to bet that the Kansas state legislature gets more Republican come the next election. People are ready for a party which represents the little guy and people will come out to vote for that party.

I’ll give you a REAL ‘progressive’ idea:

FREEDOM FROM FILTHY COMMUNISTS AND OTHER DEVIL WORSHIPPERS

They have more who are for them than who are against them! Keep on Standing against the narrative!

With that kind of majority in the House and Senate, how did they get a D governor?

plain and simple. cheating. that’s all scumbag democrats do.

I live in a red state, but there is something funny- smelly about it. with our gun laws, primaries, GOP, politicians, EPA? (think of kinder Morgan pipeline) , public health (covid tracking/contact tracing, and a stop at some horribly filthy convenient store operated by some middle age foreigners that didn’t seem to give a hoot and located along a main road to wherever)……+…..

I faulted a local restaurant thinking they closed because of the covid problem. It had a sign on the door saying to comply with EPA. Didn’t believe it, because of the timing and more push to create fear of covid. The sign on the door was telling the truth. Wonder if the manager was forced to mention that, instead of closed due to maintenance. Gutsy…..for that will make more efforts to go there.

McConnell dumped piles of cash into Gov election against Kobach, mostly KC area.I can’t even remember who the other Republican was, but stupid Repubs did what they’re so frickin’ good at…split the vote and voila, Democrat Kelly is now our Gov. I thought Kobach would b a shoo in. He’s now wanting to run for AG and he’s already getting negative press.

A smear campaign against Kobach to start. Then they cheated in the count

R’s won all down ballot. You know as well as I that Repub voters didn’t vote D gov but the rest R’s. Powerful D’s knew they couldn’t have Kris Kobach here, corrupt ones thought if they at least get their gov in they could bully the R’s at will……they thought.

Does that pattern sound familiar?

Of course it does:
1.) In several other states, GOP candidates won down ballot BUT voted Democrat (Biden) for President? Really?

2.) You also saw a version of that pattern in some states (e.g… MI), where the only vote marked was for President — and a vast majority of those were for Biden. Hmmm!

Are the aforementioned possible? Anything is “possible”, but the probability percentages of those happening is STAGGERING!

Why do we always let the dems get away with saying we’re the “extremists” when they lose?….we need to toss that word back on them- they are the extremists! They are leftist, commie, alinsky radicals with no morals. They are blm antifa and nancy pelosi, AOC, the somali, Maxine waters, Mazie Hirono , Penguin Nadler – extremists….they are NUTS. Let’s start calling them out a little more – huh?
They are all friends of the criminal extremist Biden family.

Just call them crazy communists and make it stick.

Hope springs eternal….Prayers of a righteous person avails much, where is he? the 5th seal is … read carefully.. are we ready?

Totally thought that was Hillary

What goes around comes around.

Senate Minority Leader Dinah Sykes, a Lenexa Democrat, derided the “veto override-a-rama.” “Today leaves no doubt: The Kansas Legislature is more extreme than ever,” she said in a statement.

how can they limit the number of ballots returned by an individual if they use ballot drop boxes? I’m not sure Kansas does drop boxes but it seems to be a recent and widespread new device employed to cheat in many states.

We don’t do drop boxes.

We have the opposite in Oregon with a super majority of Dems. They willy nilly pass crap that ALWAYS removes liberty and freedom. The opposite is true with Repubs in Kansas. The night and day difference is obvious!

Be accurate U.T.T.! Dominion Voting (SOFTware driven) Computers “SAY” the Democrats (hippy mafia) have a “super-majority”.
But, do they? Really?
I doubt it.

Why did KS elect a dem governor like that? You’d figure that a dem in a conservative state like KS would be able to play both sides. I guess a dem is a dem regardless of where you go nowadays. Dems < trash

Old man on the mountain

Way to go Kansas! Red state people are taking the power back!