“We believe that America’s destiny depends on upholding the Judeo-Christian values of our nation’s founding. We don’t worship government, we worship God. We are all committed to the same beliefs and the same core values. We believe that the Declaration of Independence and the American Constitution represent the principle of human civilization. Our founding documents are not a source of shame, they are a source of great pride. We believe the United States of America is the greatest and most virtuous Republic in the history of the world and we’re going to keep it that way. We believe in law and order and we believe in the Constitution as it was written.”

"No teacher should ever be allowed to teach transgender to our children" — Trump pic.twitter.com/36jmCzSHe2

“And if I become President someday, if I decide to do it, I will be looking at them very very seriously for pardons.” 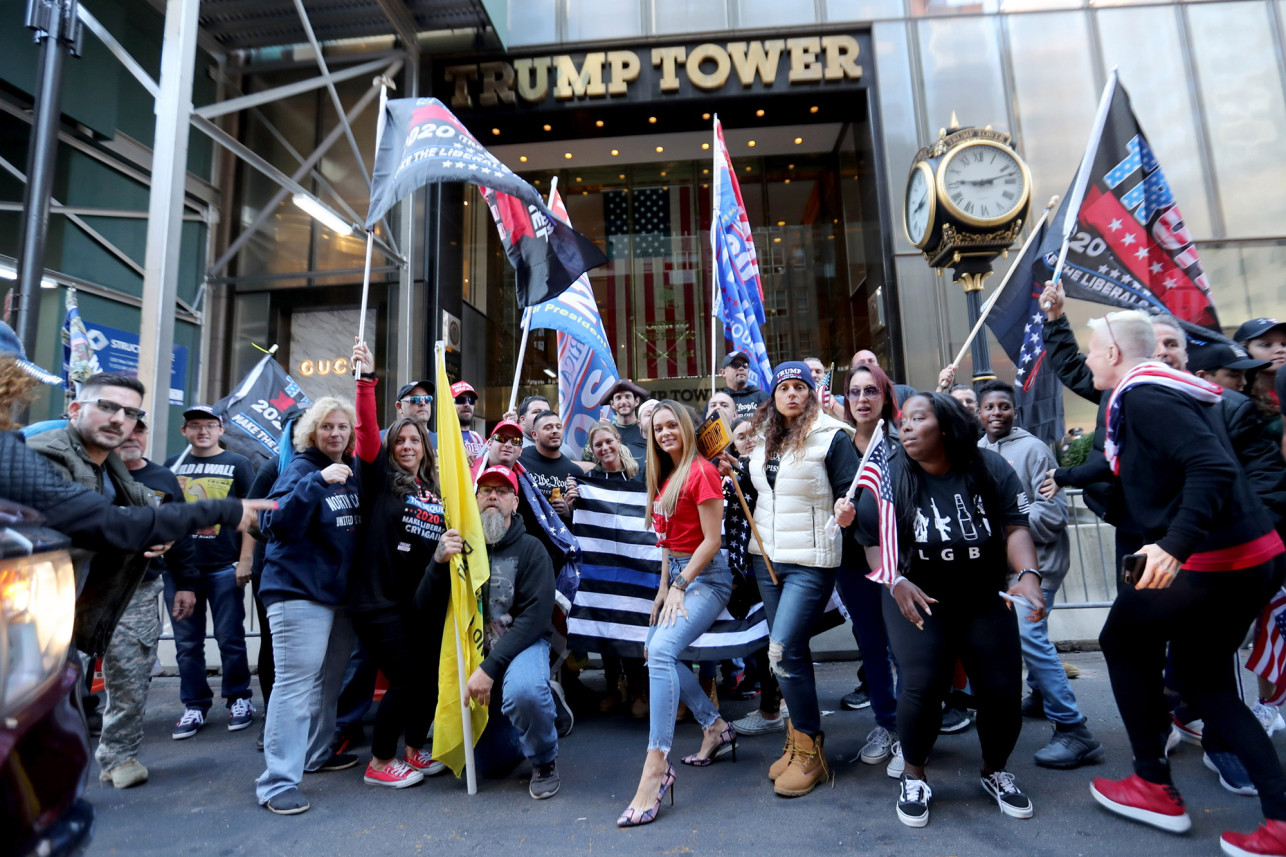 He looks very good. Extremely clear-headed, which makes me wonder what Darpa toys and/or drugs they were tossing at him last time. Roger and Jones mentioned this when he was slurring his speech for a few weeks during his first term.

Trump is an imperfect instrument. But I don’t want to waste DeSantis. We need Florida. And this is the WWE so Hogan must return and win. We all know it. The question is—will he finally decapitate the enemy this time?

Agree, he’s sharp as ever. I love desantis but he’s got some more miles on him. Can do FL some good and run for president later on.

Too little, too late.

If they get pardoned, they should also get financial compensation. And any provocateurs should be charged (and dismissed if they were working for the feds).

If the left winds midterms, Im leaving the country. There are hundreds of places around the globe that are cheaper, safer and even nicer to live than this sinking ship of a failed country.

He’s just a political mouth now. He isn’t running, he just likes pretending to be President so he holds the rallies.

But then, trump knew what was going on, he tried to get the National Guard deployed. Why did he even go to the rally knowing his supporters were being set up by the federal government?

We don’t know for a fact what he has or hasn’t done for them. There may be financial or legal support being given on the down low

when trump says that he is considering doing something, he isn’t going to do it. Like the anchor baby executive order.

He could have pardoned Assange, and refused. He won’t pardon J-6 political prisoners, either.

When he says consider, in Trump language, it means its a done deal.😁

If they are teaching your children to kill themselves imagine the other things they are teaching. I have seen the most terrible things. They teach kids that they can use meth and it’s all good. It’s their choice. No way. Drag queen story time is only the top of the iceberg. Do you want me to go into more that I have seen? No you don’t. These people are the most evil scum imaginable. Get involved.

Give up the barbeque people!!!!! Before you loose everything.

DeSantis will be the strongest vice EVER!!! IM AT THE VERY BOTTOM AND I WANT TO HAVE A CHANCE TO BE ON TOP!!! Just a chance. Yes there are good jobs out there right now but I want a car to go to work. Get the f out and vote people. Better yet get active in the political arena. I did. You can too!!!!!!!!

Consider it??? Umm, no. Pardon them, period.

“I will CONSIDER”…doesn’t cut it

Consider punishments for those whose violated 18 USC 242. Then I might have my vote not counted for you. What a sham. Remember Trump said take away the guns and do due process later. He isn’t much better. The lesser of two evils doesn’t work for me when both shit on our bill of rights.

You would prefer the current resident?

I love him so much. He looks fit, calm, confident and bold.

How do we hear where he’s speaking… we are in Tennessee and would’ve driven to Nashville have we known!

I’d love to see someone who loves their country as POTUS. DJT loves this country,and desires it to be great. He’s an accomplished business man.,and believes in one nation under God.
Joe Biden is a compromised sellout, and should never been a candidate for POTUS, much less in the oval office.
I do believe however, that we would never have been able to see the depths of corruption of which our entire government ,and it’s agencies of sunk to,had DJT not “lost” the election.
My prayer,is that loss was not in vain,and that we find our courage,and strength soon.

Well as you can tell in the comments below the fake conservatives are posting. Yep, posting about how Trump didn’t do EVERYTHING they wanted him to do so they’re opposed to him. I KNOW some of these people are Democrats, RINOs, foreigners and of course the Alphabet Gov’t Agencies.

Well, you’ve convinced NO ONE so keep trying your best. I know Donald J. Trump is NOT the Messiah returning to Earth! I don’t expect perfection. But as I say about other conservative candidates and office holders…. an 85+% record is a good record in my book and worthy of re-election….. unless someone actually running has a higher percentage.

Yes sir, he’s really great at picking the best the swamp has to offer.

Consider?!?! CONSIDER?!?!?! You’ve gotta be kidding!!!! They’re being held on false made up charges. Who in their right mind thinks that the country with the greatest military power in the history of the world can have it’s government overthrown without a single firearm???? Should people have broken windows and climbed through them? Probably not, but that was a tiny minority of people doing that and most likely perpetrated by the likes of Ray Epps and other deep state cons. He shoulda pardoned Jullian Assange too, but didn’t.

I really pray Trump learned his lessons from his tyranny during Covid.

I pray he never again uses the CDC to unconstitutionally ban evictions of renters.

Never threaten the job of the FDA head if he doesn’t authorize a vaccine by COB.

Not fund the closing of states by signing declarations of emergency. He funded the states shutting down so they wouldn’t have to rely on business, sales and income tax to remain solvent.

Not support red Flag laws and stop and frisk.

We should consider Ron DeSantis instead.

Nobody over seventy should be allowed to run for president.

Yeah, thanks for the clot shot. Should have pardoned Assange. Disgrace.

You a bit butt hurt Beto?

I’m not interested. He failed in locking her up, building a wall, not signing huge spending bills, was for DACA, Zero interest rates, banning bump stocks and for red flag laws.

You only missed one, but it’s a big one. He’s responsible for the clot shot which he signed of on in September of 2019, three months before it ever cam to the U.S. The shot which was already waiting in the wings. I don’t hear him fighting for all those who lost their livlihoods refusing this death jab.

Wholeheartedly agreed. Funny how “conservatives” can also support someone based on demagoguery, and still cry foul.

He should say, “I will pardon them. They are innocent. They are being mistreated, and the people who have abused them will themselves be prosecuted.” Draw the line that way, Mr. President.

Very seriously. Hmm, how vague. When will people, including Trump, get it through their thick skulls that ALL of of J6 protestors should be let go immediately! Tossing the fake insurrection charges, gets you at most trespassing. All of the J6 protestors have served more than enough time to get out on this charge.

Second time I’ve read you use this “fresh” garbage. Not buying it, troll, get something new. He is far from perfect and NOT our savior (that title belongs to Jesus Christ), but puh-leeze dispense with this “fresh” nonsense.

As far as I’m concerned, the J6 prisoners are POWs and should be treated as such. Not just a pardon, in other words. Ample compensation for their losses as they have been unjustly incarcerated, and public recognition of such, too — no just trying to sweep this debacle under the carpet. Anything less is a stain besmirching this country and its founding principles.

Yes, they are POWs who need to be rescued.

I agree with you whole heartedly, but you can blame George W..and his Patriot Act.

And Trump signed its renewal…

Did he just find out about the plight of the January 6 political prisoners?

Don’t look for a man to save us because it’s not going to happen.

DJT can’t fix this, and he isn’t a Saint. Why did he endorse Operation Warp Speed? Ask yourself that question. Let that one marinate in your brain for a minute. DJT greenlighted the millions of tax dollars that were given to Phizer, Moderna, J&J, etc. Phizer, and Moderna were given your tax dollars by DJT, to jump start the global medical tyranny that continues to this day. DJT is just another disappointment. People are blinded by hope. Whatever happens to this country is no longer in the hands of the people. Those days are over. Rome didn’t fall in a day, and neither will the USA. We’ll just continue to decay, and rot from the inside out. No different than Greece, or Rome. This country is done. Done. Done. Done. It’s actually pretty gross living here. I feel like I died and went to hell. Only I wake up to men screaming that they’re women, and woke ideology being jammed down my throat. I try to live my life in peace, but just being in society is disgusting. I feel like a foreigner in what use to be ‘my country.’ This year, The 4th of July should be a day of mourning ☹️. The USA 🇺🇸 is dead. Anyone who doesn’t see that is delusional.

I hope I get to see the outcome of Nuremberg 2.

Unfortunately it won’t happen in our lifetime

It must suck to be a defeatist

“Vote for me and maybe I’ll do the thing I should and could have done on my way out!”

Too busy pardoning rappers to care about the people who actually support him.

He had the opportunity to defend them and pardon them before he left office. He is just pandering now. If he gets the nomination ill have to vote for him again, but I really hope DeSantis runs. He actually does the things that his base cares about, then enjoys the praise. Trump seems to want the praise first and foremost, and maybe he will talk about so.ething you care about at a rally and then not do anything.