Car randomly pulls up next to a cop, driver jumps out with an axe pic.twitter.com/DokmtaPjDo

A Naperville, Illinois police officer fatally shot a man after the Valedictorian arrived at a traffic stop involving another motorist and charged the officer with a hatchet. 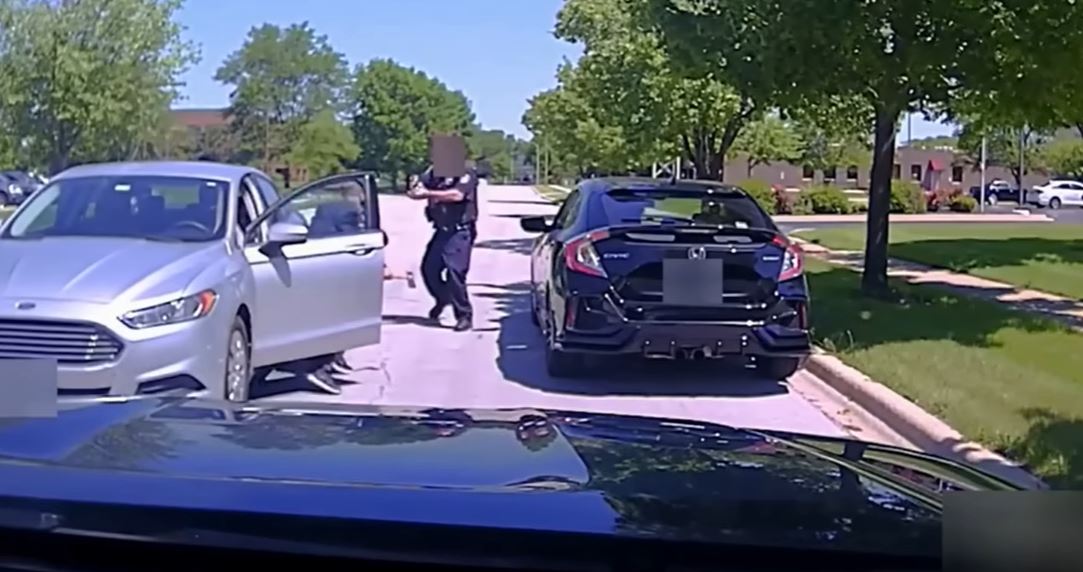 The attacker’s name is Edward Samaan of Naperville, IL.

Well, you see, he had heard that you shouldn’t bring a knife to a gun fight, so he brought a hatchet.
He didn’t win, but at least he finished in Second Place.

At least he was wearing his mask.

The police officer should have axe the man to put the hatchet down.

Brandon is a Boob

Love it the cop is a hero for immediately defusing the situation. No harm was done to anyone. Oh except the jackass who came to a gunfight with an axe. Hahahaha

I wonder if the perps appearance was really random.

Quick and good response by the officer. The deceased will continue voting Democrat.

Good thing the dumbass didn’t have the car in park the first time. It gave the officer a couple of extra feet.

Good reason to carry one in chamber and read to ready. I’ll let y’all argue about the “locked” part. I’m a DA/SA guy.

You’d think a valedicktorian would know what “bury the hatchet” really meant. Blame his school.

Come on man he just wanted to show the officer his new hatchet that he won for getting into Harvard.

Looks like the wannabee cop killer initially forgot to put his car in park, giving the officer time to prepare for a possible attack. Divine Intervention.

Cop did gain a second over that but to me it looked he was preparing before the car came to a stop. He went from Condition Yellow to Red real fast.

Another reason for 30-round magazines.

I’d be lying if I didn’t say I kind of enjoyed watching that maggot fight for his last breaths.Burn in hell Samaan

How do you stand before God after something like that?! Unless you’re possessed and under the influence of Satan against your will (if that’s even possible with True Christians). Just say, “Yeah I know, Lord” and board the Hell Express to await Judgment Day.

Do not concern yourself with judging this man. It is NOT for us to judge.

I like how they keep saying, “Don’t move.” until the perp is dead. Then, “Send an ambulance.”

Tell us how you would never act the same with your life on the line. How you would shoot the perp in the leg (flesh wound only) and then wrap him in your arms until the medics arrived.

Play stupid games…win stupid prizes !!! That officer just saved someone’s life down the road… Officer should get a raise !!!!

I think he was also shouting to the guy in the car from the original traffic stop.

What was all the stuff that fell out of the gus sweatshirt when he dropped?

They always tell the dead men to show their hands, and cuff them.

Another guy off his meds probably.

Sad, but glad the officer was unharmed and will be going home to his family.

Who is Ray Epps?

They cut out the action, what a let down.

First rule in a gun fight, have a gun!

Looks like the kozzer had a G17, I just picked up a nice new Gen 4 few weeks ago. I prefer my .45 acp Glock G30 and my Tisas 1911, but 9mm for house protection is fine and hatchet men evidently. We love you CFP!

Gee, the fella self aborted without throwing much of a fuss… Any age now seem appropriate… Damn!

That’s why I say man, nice shot
What a good shot man

That cop was tracking from the git go. He was aware of vehicle slowing and trying to stop. That in itself got his hand on his gun. Then our cop was expecting the worse and here it comes right at him. Guy never knew what the heck hit him. Police work at its finest. Home to wife and kids.