US pageviews in September 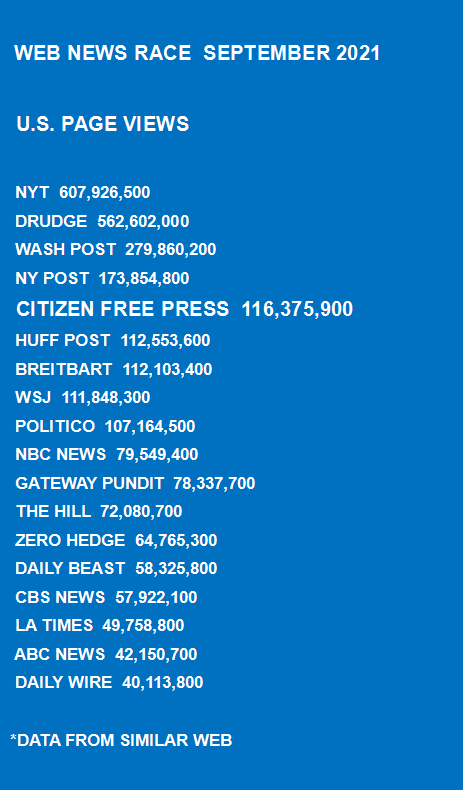 CFP moves from #11 in May to #5 in September with continued spectacular growth.

This is the first time Breitbart has finished in 2nd place for monthly pageviews since 2012.

THANK YOU TO MILLIONS IN CFP NATION

This is your Citizen Free Press

Comment sections becoming filled with garbage, no longer worth a look. Sifting thru the trash is boring, but hey “free speech”.

Of the multitude of articles written in the past few days detailing the squabble in the WI GOP over Rep Ranthum’s efforts exposing election fraud and Assembly Speaker Vos’ attempts at silencing him amid evidence that Vos was complicit and you chose to link the one from the liberal rag? Milwaukee journal sentinel is a leftist propaganda publication and they come out sympathetic to Spkr Vos. That should at the least give one pause. I guess CFP is slipping down “drudge avenue”… stop it. Be better. 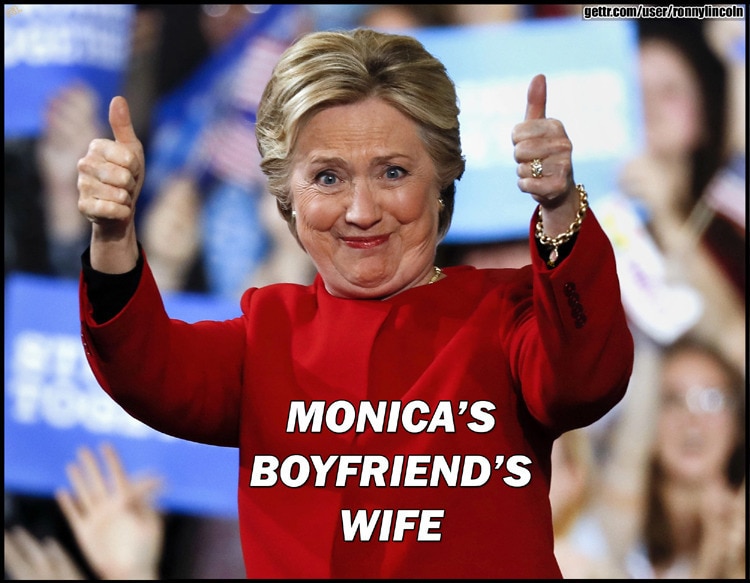 This is the only site I’ve ever seen where one of the commentaries cite Jonathan Swift. Boom.

Your meta refresh rate is too fast, 120 seconds. You can’t get 1/4 into the page without a refresh. Make it like 600 seconds. I get aggravated and leave every time I come here and I love the page. Keep up the good work.

Clean up your language. You will lose your message in vulgarity.

That’s great but how in the heck are NYSlimes and Sludge 1 and 2 with each 2+ above CFP???

The book ‘The Decline of America The Rise of Communism In The United States’ is creating a lot of interest and selling fast for a book just out.

I heard your interview of Raheem Kassam and had to check it out. I’ve not stopped reading since I got here! You guys built something better than Drudge as you produce your own articles, but you also link to third-party news sites, too.

God bless you all and continued success!

It is a shame that the corrupt lying New York Slimes gets so many views.

Breitbart can go F themselves. I’m happy to see this.

Need to publish list of nationwide protest locations for Nov 15th. In CA- Mission Viejo, Corona, Huntington Beach so far but there are more!

I salute all US Military Veterans.

They are doing it Right. Congrats

Who tf still goes to drudge!? What a joke of a website

The scariest number “562,602,000.”
Drudge……I know Dems never go there…..I quit years ago when it was obvious that they were anti Trump……that leaves rinos and the clueless.

Can’t wait until you pass turncoat Drudge. The 10-20 visits a day to your website used to go to him. Now I only visit occasionally when I want to remind myself what a sellout looks like. Never change or I’ll be gone in a flash.

I used to do the very same thing, I would go on Drudge 4-8 times a day to catch up now I might go in the site once every 4-8 months.

I completely blocked out Drudge a few years, when I quit, I never look back Example I also called cable company –told them drop CNN and MSNBC from my package or drop the service completely

great news for the hard working owner of this site, all of us, america and the entire world!

while all the others cower in fear of free speech, cfp promotes it and thrives because of it.

many many thanks to k a ne and many many congrats!

Drudge must be using old numbers. Everybody I know left Drudge a long time ago.

Drudge also inflates its figures by forcing browser refresh every 30 seconds. It’s so annoying. Although I don’t deal with it ever anymore.

How in the hell does Drudge still have that many hits?

Just heard the Kane/Raheem Kassam interview. Awesome! Glad there are people out there digging for truth.

Just 4 years ago nobody heard of Citizen Free Press.
Now it’s one of the 10 leading news websites in America
Started going to CFP in October 2020

Do this every month, please!

AWESOME! This is PROOF the old USofA is still a very conservative country besides everything we hear about and is vomited by the woke MSM.

Congratulations to Kane for following his dream and we reap the benefits. 🙂

Congrats! I found CFP quite awhile back. I quit BB because they started condemning President Trump when he made accusations of a stolen election. I often wonder what Andrew Breitbart would say if he were here and saw how today’s BB has turned its back on conservatives and President Trump. Glad that CFP has given us “The Alternative to Drudge.” MAGA! Let’s Go Brandon!

Come back and check your comments

What happened to all the comments from late afternoon to mid evening yesterday? Were they purged?

Nice but they can do better. When you bookmark pages what you bookmark is no longer on the page. So you can’t share pass stores.

Why is anybody still going to Drudge?? Are they that clueless? Still not caught on with what has happened there? Must be the rino crowd…

I do love that gateway pundit beat out daily wire!

It’s appalling how many commie sites are on the list!

Like many others here, I’ve been with you since early on.

Delightful to see that one-third of the pageviews are from overseas CFPers! Freedom worldwide.
116+ million US pageviews; 161 million global pageviews
CFP is international!

And I was so happy to read your post that 99% of that time-consuming nonsense has been disappeared. Well done to you for all your actions and all the rest of us who helped to remove it at its source. May it stay so.

So nice to hear from you. You have been here at CFP from the beginning.

Hi Citizen Kane. I had a big smile when I saw your April Lorenzen headline. So Paul Sperry (and her attorney) have finally outed TeaLeaves as April Lorenzen. Something you and we have known since April 2017 🙂

In case Durham needs the evidence of the DNS logs fabrication which also proves she did it, here it is:

I thought of you with that headline.

And L Jean Camp is here in Bloomington.

She probably lives within 10 miles of me.

Haaaa, yes I remember a while ago when you had the urge to go and interview L. Jean Camp 🙂 Looks like the chickens are coming home to roost, finally. People are thirsting for justice.

Ditto on Kane’s comment V. Good to know you are still in the wings.
Always appreciated your content laden input.

Thank you, both 🙂 Yes, I’ve been watching and….

I’m sure you did better than #5 except for all the robotic page views to all the dung-sheets listed in the 4 places above you.

I left BB because they censored any comment one left with certain magic words to describe the stolen election. If you were general in saying it was stolen they let it stay but if you used detail like ISP from China, Dominion, flipping votes IT GOT REMOVED. What’s up with that? Another on is their protection of Moochelle Obama, you were not allowed to use “Big MIke’” in any Big Mike story

Well, Gateway Pundit just switched away from Disqus, for better or worse, changing to some other commenting service I’ve never heard of.

They’re at 78 million page views today. I’m very much interested in the next report. I’m guessing they’ll be down about 20%, joining American Thinker in the basement of obscurity. Shame, too, because both sites have some really good writing from time to time.

I’ll never abandon AT. Content is most always concise and the web page is orderly and not obnoxious. Loss of direct comments was not an issue for me. One of only a few that remain from my former list of regular visits.

Gateway was never a favorite, primarily because the site was a chocolate mess. Almost as bad as Glenn Beck’s earliest efforts. Uggh!

BB definitely has degraded what they used to be.

Replying to King David at October 19, 2021 4:36 pm re possible reason for Breitbart censoring mentions of Dominion:

They were probably threatened by Dominion (like Newsmax who also caved). Or perhaps BB is included in the lawsuit by Eric Coomer against 15 organizations and people for defamation. It’s estimated that has cost Coomer a half a million so far in legal costs, so likely someone or Dominion is financing his lawsuit.

Have you seen the outrageous behavior and content in the deposition of Eric Coomer (formerly of Dominion or is he still there but demoted?) during the discovery phase of this lawsuit, first inexplicably and highly irregularly sealed by the judge on her “own accord” and then unsealed again.

[Citizen Kane, I tried to get the “archive.is” version so as not to put TGWP in the comment, but to no avail. This link will not go to TGWP, but to the Wayback Machine instead.]

“Eric Coomer is the former Director of Security and Product Strategy for Dominion Voting Systems. After the 2020 election debacle, where votes in at least five states had very suspicious results while running Dominion computer systems, center-right journalists made common-sense observations that the results appeared rigged. One journalist [Joe Oltmann], who had infiltrated a conference call filled with Antifa-sympathizing callers, remembered that on the call “Eric from Dominion” was going to ensure that Trump did not win re-election.

The mainstream media has spent a year bullying and suppressing the thousands of eyewitnesses, filed affidavits, investigations and proceedings meant to uncover the big fraud. ”

“Eric Coomer decided to sue 15 organizations and people for defamation in his home state of Colorado. He claims to have been defamed by center-right journalists allegedly saying he was tied to Antifa, and that he helped rig the election against Trump.”

“…he was the head of Product Strategy and Security for voting systems in 28 presidential election states in 2020, including every swing state, and yet was publicly posting vicious anti-Trump screeds, including the nastiest comments possible against Trump voters whom he called fascists.”

I’ll say it again, this can’t be real because who in the world reads the NYT?

Wow! #5, Not bad Kane.
Your continued determination is paying off.
Keep it up and don’t look back.

I hope you beat Drudge next time

I can’t believe drudge is still around.

Congratulations!!!!!!!! Fruits of your labor.

Congrats Kane! That is really awesome! CFP is the best! Plus, all the people that comment on here are pretty great, too. I don’t see the arguments like I do on some other sites I visit here and there. Keep up the great work!

I sincerely congratulate you for your hard work and thank you for giving American patriots a voice and a place to gather and see the real news. My only regret is that I wish I found this before I did. I found this website in 2019 I believe. I am always amazed that I read stories here, and see them being televised 3 days later. You have my respect and thanks for all you do.

If beating The Sludge Report means increasing your page refresh rate, I think we would rather be visiting a superior site in content than one in hits on the internet.

No one else has a champagne room!