A car just drove thru a crowd of protesters, dragging one on his hood, during a peaceful demonstration in SE #Portland.

The group of approx. 25 temporarily occupied an intersection in an act of civil disobedience in a demand for the abolition of police. #pdx #portlandprotests pic.twitter.com/NI46lhyBSH

Good times in Portland with the Valedictorians.

There was also some sweet Antifa car action in Seattle… 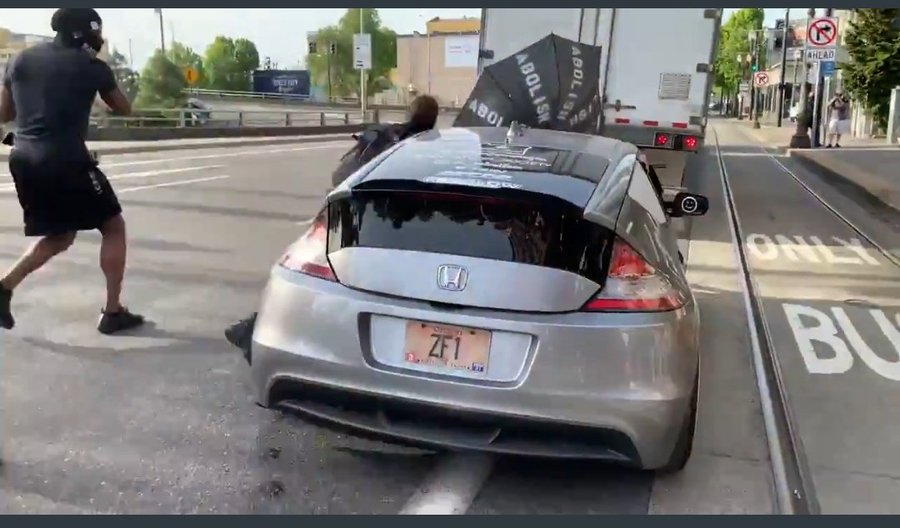 Run them ALL over!!!

Remember folks, now in the Great State of Oklahoma, the Honda driver is now justified in that situation for running over scum marxists like that:
https://www.washingtonexaminer.com/news/oklahoma-senate-passes-bill-protecting-drivers-hit-protesters

A bill meant to protect drivers who hit protesters during the course of fleeing a riot passed the Oklahoma Senate.

House Bill 1674, which passed through the Senate by a vote of 38-10, would increase penalties for blocking roadways while also providing immunity to drivers who kill or injure motorists while fleeing the scene of a riot in fear for their lives, according to the Associated Press.

“The kids cowered in the back seat because they feared for their lives,” one of the Republican sponsors of the bill, Rob Standridge, said. “That’s what this bill is about.”

According to the bill, it would become a misdemeanor punishable by up to a year in jail and a $5,000 fine for protesters who block a public street.

TAKE THAT ALL OF YOU RED STATES….ESPECIALLY YOU TEXAS!! WE’LL MEET YOUR LAW & ORDER…..AND RAISE YOU A FLATTENED “PRO-TIFA” SCUM MARXIST THUG!! 😉

VISIT BEAUTIFUL PORTLAND WHERE THE PEOPLE ARE FRIENDLY AND THE PROTESTERS ARE PUSSYS.

OMG! That guy just ran over one of the Protestors!

They protesting to do away with the police? Did they call the police on the driver? Lol.

I love stories with a happy ending and this one was happy for the driver. I guess the piss ant on the hood got a well deserved case of Honda rash.

I hope few more of the morons get run over by cars! Maybe they will learn to stay away from people driving cars; maybe! Personally, I would not hesitate to run through Antifa and BLM protesters illegally blocking my path, sending them airborne before smacking the pavement!!! These goons are the useful idiots of the Democraps and the Left. They need to learn not to chase after cars like stupid dogs! We must teach them to avoid moving cars, or risk life and limb!!!

Don’t you love a game of bowling with Antifa pins?

Things that make you go “hmmm”.
Young, white guy.
Window down.
Not enough violence from the protesters.

The new Florida riot law legalizes this action to escape rioters; i.e. ANTIFA and BLM. Another report stated one of the demonstrators punched the driver before his actions.

window rolled down or broken?

Should have backed up over them a couple more times…

They don’t believe in cops. Lol

can watch that all day

Taking back America from a commie?

That license plate should have been blanked out.

“Should we shoot them?”

Looks like an attack on the person driving the car. The driver was merely defending himself from known murderers and assassins.

One of the thugs tried to reach inside to get at the driver.

This reminds me, a friend is getting a M1919 belt fed .308 twin gun set up in a crank operated triple A configuration. Should mount great on a one ton and would be perfect for these occasions.

Where can I get my very own Antifa/BLM hood ornament?

Arrest these punks. This is dangerous. Fine them. This isn’t civil disobedience. It is disobeying the law

Ya know what’s most comical about this incident? They got ran over by an “eco friendly” hybrid! LOL

This an “enough is enough” moment and there seems to be renewed momentum for these. Where is Charles Bronson when we need him?

What a dumb tweet from a dumb twat… these “protesters” are not “peaceful”. Stop peddling lies and misinformation

So fun !,the driver waited too long,could of been knocked out! Next time ….when they look at you funny.

To bad he wasn’t popped.

The car paid the taxes to use the road, the agitators did not.

Now he must get a new license plate minimum, or better yet a front claymore.

It would be nice to see a pickup with a tarp covering the bed driving past these criminals. When they attack the truck the tarp flies up and 5 strong dudes with baseball bats rise up and have batting practice on these numbskulls! They really need it bad!

Didn’t show the tractor trailer going through. He was trying to follow him, as he should have.

Hit the brakes first, then hit the gas…

He’s got VTEC yo!

You know the guy in the other car that was not wearing his mask.

Seriously, what the hell? Put your mask on dude. You voted for your tyrant governor and mayor so put your damn mask on!