An exuberant Marine Le Pen, who has handily won her northern France district, has taken the stage in Hénin-Beaumont, calling the seats won tonight “by far the most numerous in the history of our political family” as estimates are giving her National Rally party 89 seats, more than 11 times what it won in 2017.

She says her party has helped make Macron a “minority president.”

In 2017 Le Pen's party got just 8 seats; today it is looking at possibly 89. To have such a massive number of RN deputies in parliament represents the alarming normalisation of far-right discourse in French public life

‘The result is disastrous for Macron’ 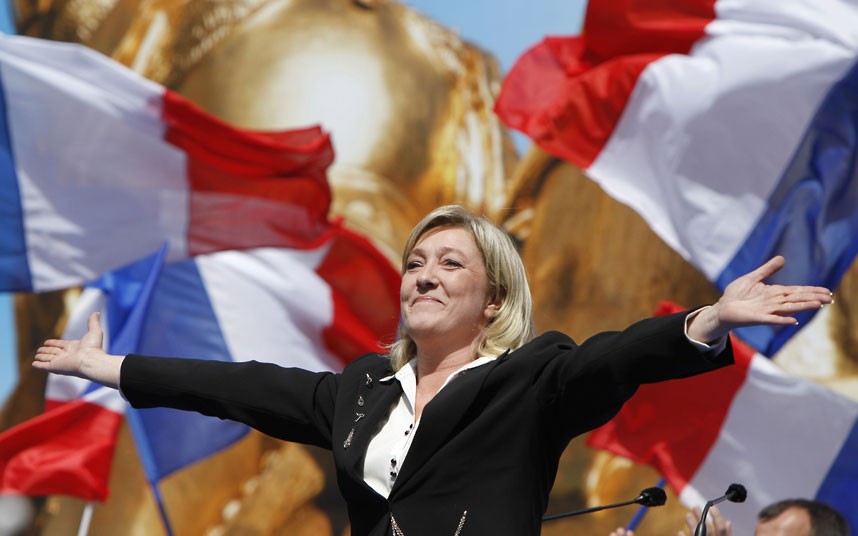 “…represents the alarming normalisation of…” Normal?

Nothing alarming there. Good new for the world

“Far right?”. Well Le Pen certainly got this one VERY right.
And it’s a heap lot better being right than wrong.

this is great news

sophie pedder is a useful idiot

Oblamo’s not sure what just happened to his little buddy but he knows it’s not his fault. I hope micro Macron isn’t banking on help from Biden.

The people have spoken! Seems to me Macron is not liked in France. How many people think Macron has been winning rigged elections?

The Political Pendulum is Swinging back !!!!

Is Nancy Boy Macron’s time in the sun almost up?

“We, the aristocracy, *sniff* look down upon you with disdain. We shall establish a global governance that is better than the EU ever thought about being.”

“We the people disagree. Be thankful we no longer possess firearms.”

Le Pen’s Party new representation in France’s legislature is a rough estimate of the percentage of French voters still connected to reality. 89 seats compared to 224 supporting Macron confirms that the majority of French are still suicidally blind to what they are supporting.

Radical Liberalism has Ruined the Worlds Economy….Now the People realize their Mistake and begin to embrace Conservative policy and distancing themselves from Communist ideas !!!!!

Now get to work

The French are a dying country because they are some darn arrogant.

That is their core trait

Common people need to understand globalist elites like Macron or Trudow HATE the commoners, they think of common people are dirty little pigs who they need to manage but stay away from.

“alarming normalisation of far-right discourse” = “oh, crap!!! the people are finally waking up!”

Anything right of Mao is “far-right” to these losers!

They must not have Dominion machines.

Seems to contradict the results of the last election that kept Micron in power.

Not so Great Reset

Alarming far right discourse. Hardly. A globalist who doesn’t give a damn about the French people got skunked. Poor dear. I hope the “far right” ties him up in knots. I think that unlike our Republican-Democrats they have some backbone.

While common sense is defined as far right when you don’t fall inline with communist party.

I hope so but the dems count the votes in all the big cities. And the establishment gop is in cahoots with them.

At the end the guy called her far right….putting France and the people first, stopping economic migration an being against the globalist agenda is not far right, I am so sick of the globalist medias narrative

Far Right, in France, used to mean what Macron is

Leftists and globalist fail (over time) at everything they attempt.

In their effort to rename good people with good policies as being on the “Far Right”, we must help them on towards failure by openly accepting that term just like we did with “The Deplorables.”

In the 20s and 30s they called themselves progressives, then when that name got too closely linked to the failure of their policies, they switched over to liberals.

Now that “liberals” is too closely linked to the failure of their policies, they are back to wanting to be called “progressives” again.

They keep shifting our name because it becomes synonymous with winning and a better life.

Who is Ray Epps?

An IDIOT by any other name is still an IDIOT!!!

Yes, but changing a damning name to “puppies” or “kittens” bamboozles their base of indoctrinated, propagandized, dumbed-down sheep (stupidly following) and parrots (repeating their lies)

During their revolution in the 1700’s France officially forsook and expelled God from their nation… the rest is shameful political history. But soon that will all change as the nation is increasingly bowing down the the God of the ME.

Some of them. The one’s that are just trying to live in peace and are not activists.

They use Le Dominion over there!

No No No, stop it!!!! France has no mail in voting, no online voting, and above all no voting machines!!!! They DO NOT use dominion! France is paper ballot only with a limited ability under certain circumstances to proxy vote. Please people educate yourself before you make posts that are misleading.

True but it’s still about “who” counts the votes. When you have climate cult, antifa-types who will do anything to do away with culture and National Sovereignty.. they carry the water of the globalist, WEF elite. They’ve been rigging elections long before computers were a thing.

Look for the video where the votes get switched in real time during a news broadcast. It may have been scrubbed by now.

Yep, that was on CNN. The ticker tape at bottom versus the big screen they were talking about and like 200,000 votes came down off Trump and onto Ole Sniffy.

He didn’t win the election either

They did the same old million vote switch-a-roo. On live TV no less.

A major reason for ballot integrity in France: they have good chain-of-custody, interested competing parties hand-counting counting paper ballots that are voted in-person. It’s so old school…why can’t they be modern like the U.S.?
https://go.com//international/wireStory/voting-france-paper-ballots-person-hand-counted-83992829

What’s more important–doing a job honestly and right, maybe taking a day extra to do it, or, as the ABC News article editorializes, being the very model of a modern Dominion 2000 mules banana republic? So difficult to discern which way is better.

Globalist are losing huge if France goes down to the Nationalist, Hungry is not toeing the line and few others that are sick of the EU dictating refugees. England left the EU and sure others are going to leave soon. Get back on their own currency.

Way to go!!!!! same thing will happen in USA…if the election is fair…which it WILL NOT BE.

Meanwhile, on this side of the pond, Biden and the Dems are strangely optimistic

Of course they are … they know the fix is in. They cheated before and it worked like a charm, so why not just keep doing it? They know the Repubs and American people can’t, or won’t, do anything about it. Think about it – if they were really concerned about losing big in November they’d be acting like they were moving away from their progressive agenda because it’s unpopular. Instead, they’re doubling down. That tells you everything you need to know. After the November election CNN will be crowing about an “amazing and historic turnaround” and how the American people have validated and affirmed the progressive agenda. Yes, we all love paying $10 / gal for gas.

Looks like the Oligarchs, Pedophiles and Groomers are upset that they can’t bring back a monarchy in France. As they say in France” Let them eat cake”.

Marine Le Pen’s father was hired originally to attempt to bring back the French Monarchy which is a big group of people in France who are royalists, they tend to be conservative Catholics and support leaving the EU and are against gay marriage.

How do you know they didn’t pull a Biden fraud out there, it’s very plausible.

To its credit, France uses paper ballots, hand counts and requires voter ID. When Macron won reelection, I was actually surprised but doubt that fraud got.him there. Without knowing for certain, of course, but there is the power of incumbency….and never underestimate the sheeples’ majoritarian love of self-enslavement.

There is no way that Macron won the originally election

Has dominion voted yet?

NO MACHINES IN FRANCE!!!!! They only vote by paper ballots. Not saying they can’t cheat . But there are no dominion machines in France….

Down with all Globalist trash…

The root cause of most of Frances problems is unelected bureaucrats are making dictates and regulations that are destroying their member states. All by design to advance the globalist agenda.

Replace “France” with “USA” and it still rings true….