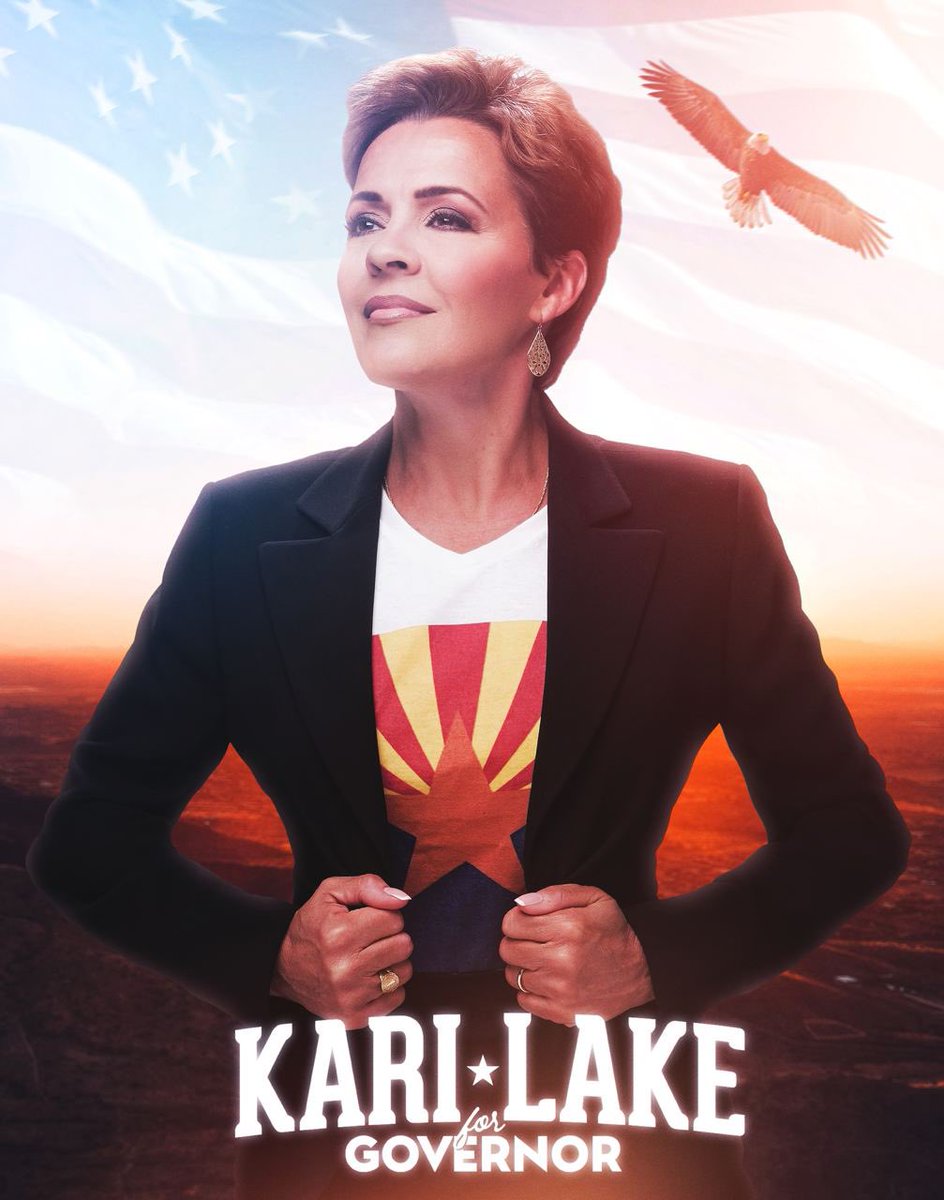 Decision Desk HQ projects Kari Lake (@KariLake) is the winner of the Republican nomination for Governor in Arizona.

The moment Kari Lake knew she was going to be the next governor of Arizona pic.twitter.com/DYbNk6JA4o

.@KariLake celebrating after taking the lead in Arizona pic.twitter.com/6TnhAvcBoa

"We're winning 7 out of 10 on Election Day votes. The majority of votes coming in are Election Day. We are going to win this, without a doubt.. Nothing got done to shore up our election and they are Wild West down here, lawless, and we're going to fix it!" pic.twitter.com/6p0xpXTTKI

“I want them to see some of the outrageous corruption and problems that we’ve seen, we’ve been documenting it for days now.” pic.twitter.com/1PPplvekcA

She will continue to gain votes all night…

The slowness of this count is beyond ridiculous. It stinks of vote tampering.
And if it’s this way now, what will happen in November ?
We need Kari in to bust their chops and clean up this mess.

I think AZ patriots need to show up at their offices and demand the count. I think they’e in the back room trying to come up with a way to cheat.

Agreed. Even dedicated watchers will tire and cheating can take place when it will not be observed.

My own lyin' eyes

Getting near? That’s an understatement!

Exactly what I was thinking

Until 2018 elections in AZ were done by midnight on Election Day. Now this bullshit.

Why the hell is this vote count not completed? Arizona obviously trying to Trump Lake! Corrupt as hell dammit! This is totally unacceptable and this scam should be dealt with harshly.

Kate Hobbs is in charge of elections.

and the corruptocrats are so happy w her performance that now she’s running for governor. Every post a winner: social worker, smugly, sociopathically deceitful, Soros-sponsored. S for snake.

Since the totals haven’t budged all day could old Doug be poised to release a midnight vote dump tonight? Will we wake up in the morning to be told there where votes “found” with only 5% for Kari? This pause stinks like a dead whale on the beach
In the August sun.

Looks like the rinos and establishment underestimated the number of fake mail in votes they needed to steal this one.

How can vote percentages be so different for mail in ballots from election day in a Republican only election? 🤔

Sulking over that might be one reason why – as of a few minutes ago – they appear not to have counted a single extra vote today since early this morning.

It’s a beautiful result: the tidal red wave of MAGA Republicans and their supporters was driven by election fraud. Such a beautiful “Up Yours” to the lying fake news- DRat gaslight.

I just saw a clip of the Soros social worker Hobbs for the first time. At a party, not counting, simply defending the dumpster fraud fire. Zero charisma or trustworthiness This is how she won the DRat nomination, I suppose.

RINOS cheat too. They have learned from Dems who were trying to get RINOs elected in Republican primaries.

Atta GIRL!!!!! Hopefully when we get rid of our no testicles, Soros bought and sold Doug Douche-ey in November, a true patriot like Lake will be in office. God bless her.

A worthy successor to the sainted Barry.

This is getting f’n ridiculous at this point.

The radio silence needs to be broken and updated counts released.

Kari Lake is The Bomb. L.OVE this fighter!

Hey CFP – how ’bout WARNING us when you’re linking us to NPR, huh?

I don’t like to give those b@st@rds clicks – and I DON’T read their drivel.

When the tallies go silent, the skullduggery is in high gear. This is the Left at work yet again.

Can just imagine it’s KILLING Hobbs, Ducey and their crowd to give it to Lake. They should have to explain the delay, so obvious they’re cheating.

There’s something fishy going on, the totals haven’t budges since maybe 1:30 in the morning.

Still waiting for a vote update at 12 noon Arizona time. Still 80 percent of the vote with Kari leading by 2 points.

If they try to pull a fast one on Kari, there’s going to be a huge uprising.

They pulled a fast one on President Trump and on America and nothing happened. Although nice and necessary, an uprising is not very likely to happen.

Yep. All hat, no cattle. Back to the NFL and NBA.

Didn’t we lose one in Washington State?

What the hell is going on in Arizona? Where are the election results?

Same as happened Nov 2020 when the counting ceased after everyone went to bed. So obvious they are cheating again. It’s killing them to give to Lake. Hobbs, Ducey, that crowd, this is driving them nuts.

Kari Lake is a force of nature! Texas salutes you Kari! Please contribute, even a dollar, to her!

You are dumb ass/

When it comes to voting nowadays, definitely never count your chickens before they hatch – because cheaters will cheat!

AZ still has voting issues. RINO vs Kari, not really a problem. That Katie character you best believe a problem!! I still do not trust the machines or anyone involved in the process. I would of course love to see Kari blow crooked Katie away in the race. I have zero faith.

I would really like to know if Kari Lake actually hosted a tranny party at her house as reported. Trump has made some bad personnel choices in the past.

Seems to be more than a few pictures out there floating around. Really wish she would have addressed it forthrightly at the outset when it all . . . um, came out.

Bet we’ll be hearing more about it. Maybe not from her Democrat opponent, but from professional Republican backstabbers like . . . you know, Pence and his ilk.

Exactly. When you dig below the surface you find Kari Lake is a deep state fraud

Kari was a Fox news Journalist in her previous life. She covered various stories, and as a result had pictures taken while covering events (such as tranny events) People at the events took selfies with her, because she was well known. This is the source of the so-called “tranny events” that she supposedly sponsored. Would a transvestite lie about the origins of the photos? – Hello, their entire life is a lie.

Let’s not be stupid any more than we absolutely have to.

If she did? So what? Back then they were considered a novelty clown show. NOT what they are now. Freaks of nature.

Hope everyone from every state is wide awake now and able to see NONE of the races in November are going to be a slam dunk. Stop talking about a Red Tsunami. Understand we must come from behind and fight like hell. The real fight begins now. Everybody, PLEASE send a few bucks to candidates like Kari, Herschel Walker, Mr. Biggs in Michigan and others.

This is our revolution, this is our time to leave the comfort of home and go work asses off for these MAGA candidates. Let them know we have their backs and then prove it with a donation.

Corruption is all across this nation in voting. Only an infusion of thousands of us across America can reverse this despicable situation. Get trained to work the polls on election day, get organized to physically be on site to observe with a small group at drop boxes, as soon as they are installed, ready to report any irregularities. Get to your county GOP and volunteer to clean up voter rolls in your precinct. Knock on doors–always take at least one friend, there’s safety in numbers–and simply verify that persons living at all the addresses match voter rolls. You don’t have to campaign at all, just verify who is living at each address. If even 75% of precincts are cleaned up this way, our chances of winning greatly improve, but c’mon! There are at least 5-6 patriots in every precinct, in every county, in every state that will do this job. We have to go find them. Make a team, fulfill the mission.

To win, we have to engage NOW. We have to be inconvenienced, we have to give up time with our families and hobbies. We have to understand that we have a country to save, not so much for us, but for our posterity. This is on us, everybody………

Thank you. Red wave tsunami my foot. Not until there is not one voting machine or mail-in ballot left. As if the globalists are just going to go away.

I’m not a AZ resident but my money will always be for the strong and brave!!

Hobbs hasn’t updated the election since 7:00 am she’s too busy doing tv 20% of the vote still to count

Dems are looking for “more found ballots” to count. 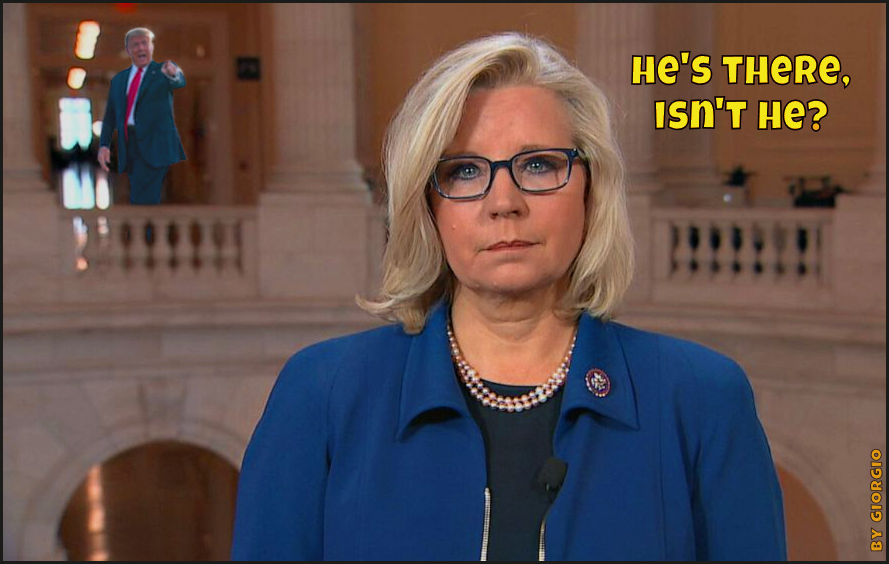 Pack your sh*t Cheney!!! Clean out that office real nice. YOU’RE NEXT!!!!

if this is a taste of whats to come! The GOP better realize how important Trump is! It Also shows….THERE ARE WAY MORE MAGA DEPLORABLES THAN YOU!!!! Patriots! Unite!

We now know that RINOs are Marxist Democrats in Drag. No ethics or honor.

Taking money from anti US enemies just like DemocRATS. 🐀

They are scared schiffless! So scared they went out and tried to scare others with that goofy “Ultra MAGA people” crap! Well count me ULTRA MAGA then.

Katie Hobbs has not updated voting results since 7 a.m. But has had time to be on TV all morning. What’s going on? Who is watching these people?

They worked until 3 AM last night.

NO!!! No Break, dammit. Get the damn job done period – Plenty of elections have gone all night before.
you’re not in a coal mine, steel mill, textile factory… you’re counting votes ya little whiny stupid corrupt bastards

Hobbs discriminated against her black staffer. How very inclusive of her. I hope she gets absolutely demolished.

DeSantis is a deepstate fraud. Amazing how many are fooled by this Zionist turd

Awesome for Arizona! And in West Michigan we have eliminated 1-term RINO Peter Meijer of the Impeachment-10 RINOS, with John Gibbs, a great MAGA candidate. Gibbs will beat the unopposed Demonrat candidate and make our disrict proud again. We Feijered Leijer Meijer!

I see what you did there good stuff

Mail in ballots unless you are in the military, overseas, or severely ill should be outlawed.

Was never in doubt. MSM is never to be trusted.

Boob tube media news is totally burying this story, instead focusing on ‘their’ abortion victory in Kansas.

Some smarter than all of us kind of guy on the Hugh Hewitt radio show said Ms. Lake could not win because she was out of money. Who da thunk it?

Why in the world do you listen to Hugh Hewitt?!?!

Hugh Hewitt said ON CAMERA, I SAW IT … “there are no political prisoners in DC”. Done with him forever.

Wow, Fox no longer even has this story on the front page.

They must be seething.

I can’t find ANY reference on their site !!

Katie Hobbs is a snotty snippy Soros funded uber-Karen with a voice like Minnie Mouse on mescaline.

I know right? Her voice is so annoying. She sounds like a 12 year old talking about playing with her favorite dollies. Can’t stand the thought of having to listen to her drone on for four years about how things have been so unfair to her while she actively subverts the constitutional rights of citizens who oppose her power grab.

Lets go Kari, kick the liberal trash to the curb.

Couldnt have said it better 👍