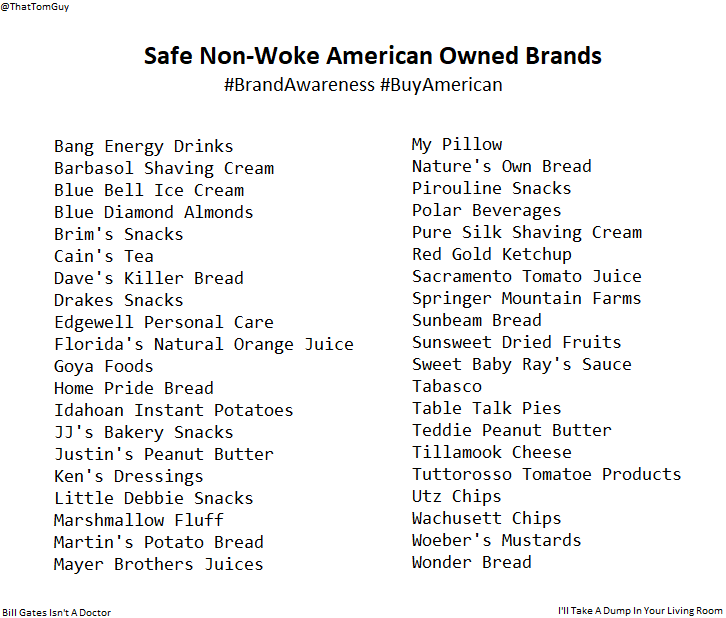 This is just a starting point for the list.

Add some names and links in comments expanding on this list and I will add them to the story.

Arizona had attempted to match over 670,000 votes and over 390,000 did not have a match. I can’t imagine that AZ is the only state whose vote was stolen.

What about wireless phone companies? Verizon just went with CRT training and I want to go to a different company now.

Do you use this service?

What about UNDER ARMOUR? I heard the were a patriotic company but I’m not sure…

Nope. Report came out in February that they were forcing white employees to attend anti-white, CRT training. Threw out all my Under Armor. Had a lot of it but don’t care and will never buy again.

The owners donate to democrats and they threw Kyle Rittenhouse under the bus. They’re 2nd amendment until someone actually uses it, then they’re your typical backstabbers.

Use the 2nd Vote app before shopping. They have a rating system from liberal to conservative businesses at your fingertips. You can download it for your phone or your desktop/laptop computers.

Calmly reading the list & then I see this.
“I’ll Take A Dump In Your Living Room”

Hey don’t you be disrespecting my Oatmeal cakes. Me and my diabetes have been eating them since the 60’s

And rabbit, antelope, frog legs, morel mushrooms aren’t always “local” , as organic as they may be. Variety is good and healthy.

It is good to put together lists like this and to patronize companies that aren’t promoting a fascist left-wing agenda. But – we need to act. I have canceled Amazon prime and don’t use social media. We have to ACT, not just talk.

Sick of all the cheating going on

I’m cancelling American Express been. Card holder for over 40 yrs.

Love this service. Thank you.

Now, honestly… how could you forget https://www.chick-fil-a.com/

Country of origin is Austria

Home Depot. They have resisted the corporate globalist pressure brought on other Atlanta-based companies to meddle with GA voting laws, and refuse to demand employees get the vax or to ask their status.

They have in the past helped fund “pride” parades. I think they have stopped that openly because of customer complaints. Still woke.

They are singlehandedly responsible for offshoring billions of dollars in US manufacturing so they can up their bottom line with a few bucks saved on Chinese products. Try finding an extension cord or wet-dry vac at HD that’s US made.

It has gotten a bit better since then, but 99% of the stuff in big-box stores is made in China.

If the product is not made in China then the parts it is assembled from are. It is not really the cheap labor, but the overburdening environmental regulations here that as forced companies over seas. Now China owns about 82% of all rare earth mineral mines in the world. I was a weapons’ engineer at Long Beach Naval Shipyard and even the condensation from the widow air conditioners was labeled a health hazard and special containers to capture the condensate and then program to remove it twice a day cost $350k a year the first year. This is one of the reasons used as an excuse to close it. Now there is not a shipyard owned by the government that can build a ship from scratch.

Totally untrue. Many products are 100 percent made in USA. Such as candles and other things.

seems I saw a vid with one of the founders was saying all employees would have to have the jab, but I don’t know where. And can’t forget they are all in with the homo pride crap. I go to Lowe’s first and only to HD when I can’t find what I need somewhere else.

They have a board member who supports BLM and contributed to them. They also made employees do online health checks before leaving home to go to work and had them do temp checks upon arrival–that’s not a form of asking status?? Don’t tell me they won’t eventually require the jab.

I’m loving this. VOTE WITH OUR DOLLARS! A lot of these brands on the list are already my favorite!

If we’re talking restaurants, throw in Culver’s. They have never committed one way or another publicly, but are clearly not lefties. Patronize them when possible…and their food is dang good.

If the 80-100 million of us would just band together and stop supporting the businesses and institutions that HATE US (vote with our dollars) we could affect change but many don’t out of convenience, etc so “they” will keep writing the rules.

1. Imagine if the conservatives got together and stopped buying from these reeds,

2 imagine if it were with the same ferocity as the Goya situation, there would certainly be a lot less of those extra millions to fund the libz

Get away from processed cat/dog food and feed them what their bodies are meant to digest, raw meat, organs and bone. Check out the BARF diet (Biologically Appropriate Raw Foods).

The pet food industry is a giant lie and they profit off of killing our pets. See the documentary Pet Fooled. Feeding our pets processed bagged food is like eating McDonalds everyday. They are eventually left with a myriad of health issues including skin issues, kidney and liver failure, and cancers.

Here’s some guy on youtube who feeds his dogs raw food: https://youtu.be/94C79Aovfv4

We had a dog that lived to a very ripe old age. He lived on the steak and prime rib scraps my mom brought home for him from her waitress job every night. That dog ate better than we did.

You’re lucky your dog didn’t get gravely ill from eating raisins. Those are highly toxic to dogs.

Nope. Mildly toxic. A few might harm a teeny tiny, but healthy sized dogs won’t get sick from a few raisins ( or a chocolate cookie, or a bit of onion).

Cats are obligate carnivores and require a high protein diet. It wasn’t the high protein in dr. Marty’s food – it was all the fruits and vegetables that were in there that did that to your cat. Many people think that since cranberries are good for people’s urinary tracts that they must be good for cat’s urinary tracts – but that could not be further from the truth. Berries contain benzoic acid and benzoic acid is toxic to cats. Another example is the use of potatoes, tomatoes, peas, oats, etc. These all contain saponins which destroy red blood cells.

I agree with the others, get a homemade recipe, but don’t feed them like a dog. My cat never liked going raw so I had to cook for him. There are good recipes out there with good ratios for the kinds of vitamins and minerals they need so just start researching. Cats need certain vitamins so actually research their needs and don’t give them the same food over and over for years. When times get tough it’s best to buy food everyone in the whole family can eat and know how to take care of everyone’s nutrition, rather than rely on specialty stores. Here’s a place to get you started, but look around for more. https://www.felineliving.net/homemade-cat-food-recipes/

nope! No fruits or vegetables! They’re all poisonous to cats with the exception of just a little bit of pumpkin so that the cats can get some beta-carotene.

Vital Essentials is U.S. sourced & produced, but get ready to spend quite a bit on a bag – they are FAR from inexpensive. The majority of cat foods are crap anyway because they contain fruits and vegetables which are poisonous to cats – prob the reason for the countless cases of feline kidney disease.

So publishing this list is a guarantee that these companies will be bombarded with threats and violence until they break down and bend the knee, no?

or they can just… stand strong? lol

Setting aside Mike Lindell, you have much more faith in corporate America than I do.

nah, if they cave…they’re just off the list with the rest of the spineless idiots.

They will have to stand against that sooner or later. We must find those businesses that will stand and we support them, so lists like these are invaluable. It’s not a faith in anyone, it’s the simple reality that we are a divided country and everyone of us will be known for the side they are on. We stand or we roll over, there aren’t any other options.

Roundhouse Jean’s from Oklahoma. I believe they are the only Jean’s made in the US of A.

Great idea. Gives me a list when I shop. I already love Sweet Baby Rays

Only problem is the first ingredient is High Fructose Corn Syrup.

I would like to point out Black Rifle Coffee is on the Nebraska list. They are no longer on my list. They’ve been gaslighting all of us to sell coffee! They are NOT conservative.

What happened to ole Matt ?

I won’t buy Nathan’s anymore (manufactured by Smithfield, which is CCP-owned).

This list is out of date. Double check it.

Not sure about their wokeness but Vivaldi is a great browser.

And MANY, MANY Mom & Pop small businesses. Shop Local!!!

Nice, already been using almost 1/2 the list for a decade or more.

Me too, without even knowing..

Not many. Are their more? I have been trying to find out as I try not to buy those woke brands I know of.

Just got back from a street fair in a neighboring town so I’ll add two:

The Little Apiary at littleapiary. com. (No space.) Absolutely delicious honey. (I bought their Clover honey.)

Also bought the coolest, most comfortable handmade headband from 2true products. Their products are only available on etsy (yuck) right now, but maybe someday they can break away.

Love street fairs and farmer’s markets. That’s where you can find your local growers, artists, and craftsmen.
Great thread. I’ve been reading the comments. Thanks to all.

As long as we’re talking small time vendors, check out http://www.Pigstale.com for the best bloody charcuterie (a fancy name for salami) on the planet.

Just an idea in an exercise of futility: If BLM – then let’s select the new CEO’s of Pepsi, Coke, Twitter, Face Book, Google, Apple, AT&T, Boeing, IBM, Micro Soft, Intel, US Steel, Alcoa, American, United, Southwest, Spirit airlines, Amazon, Wall Mart, Target, – make the LIST ALL INCLUSIVE.
Oh, don’t leave out the Makers of our medicine – computers – or car manufacturers – military equipment – if they are made in the US they must have – ONE REPRESENTATIVE of COLOR in a minimum of one of the highest offices at that company!

Randomly select the ‘BEST’ candidate for all Leadership positions – CEO, CFO, CIO, CFlunkyO, HRD – all of them. If there is not a good, reliable(?) Black candidate (male / female) – go on to Asian’s / Hispanic’s/ illegals? WHATEVER!
Fill those positions – make a few dozen more Billionaires! ‘GO FOR BROKE!’

Then sit back and watch what will happen…..

I mean there’s a sixteen year old young man – buying from Wall Mart and selling on Amazon – making $6 – 6.5 million per annum! (but he appears to be White)

Yay! So helpful. I’m committed to not spending on woke.

Today husband wanted to stop at Kroger and I said there’s other stores— I don’t shop at woke stores. He went to another store!

Still working on his Coke addition though. Lol

Steak-umms seems pretty legit based on their twitter feed.

Chicken of the trees.

Squirrel is good! So are groundhogs, if young and plump. Eat my garden, I’ll eat you back!

http://www.jamesoncoffee is also a terrific brand and they’re not posers like Black Rifle is.