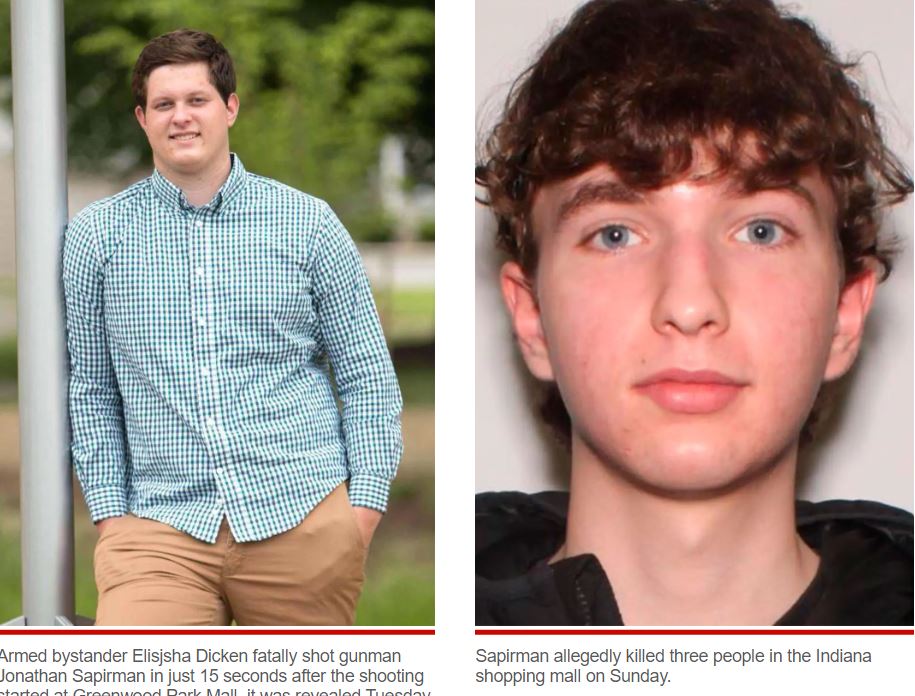 GREENWOOD, Ind. — Within 15 seconds of a mass shooter opening fire inside the Greenwood Park Mall, Elisjsha Dicken got off 10 rounds, striking the shooter 8 times, and killing him.

Police say Dicken was shopping with his girlfriend Sunday at the mall when he stopped at a cookie counter close to the main walkways of the mall. When the gunman exited the restroom, beginning his shooting spree, police say what he did was nothing short of heroic.

Armed only with a handgun, police say Dicken first engaged the shooter from a distance of 40 yards. Police say he was very proficient and tactically sound.

According to police, Dicken hit the shooter from 40 yards away with his 9mm Glock on the very first shot. Johnson County Coroner Mike Pruitt said an autopsy found the suspect had eight gunshot wounds and none were self-inflicted. He fired 10 shots with an 80 percent strike rate.

Dicken started making his way towards the gunman, motioning for people to leave behind him. The gunman tried to retreat back into the restroom, but Dicken continued on, shooting the suspect until he fell.

Police took him to the Greenwood Police Department while they watched the security video and spoke with other witnesses to confirm what Dicken told them. During the whole process, police say Dicken fully cooperated.

Dicken had no police training or military background.

Police also confirmed Dicken was carrying a gun under the constitutional carry law that went into effect July 1.

Good for him great shot. This is how it should happen every time. I would do this just like he did it.

Don’t they mean the constitutional carry law that went into effect 17 Sep 1787?

Great job young man, and to the officers for responding.

Rittenhouse/Dicken 2036….after one more term for Trump and 2 for DeSantis.

Remember that the mentally ill youth that committed the shooting in
Ulvalde, Tx that was barely out of high school and was working at a
local Wendy’s…yet was ‘somehow’ able to amass several legal semi-
auto military pattern rifles and several thousands of rounds of ammo.

All while holding down a job at Wendys…..

Far more likely he and the assailant in Indiana and elsewhere were
subtly groomed and promoted by the fbi and/or other intelligence
agencies to create a situation to which they (the fbi) could claim
credit for “preventing”..or if the situation did go forward with loss
of life, then the ’employees’* of the parasite class that really owns
and controls America could use it to call for more victim disarmament
(aka ‘gun control).

*employees = congressgrunts, senatorshits, robed Nazgul Priests
called ‘judges’ and other meatsack satraps that serve the parasite
class that rules from behind them outside of NPC’s/normies’ view
or awareness.

If folks don’t believe that’s what is currently happening,
take a moment to read the following:

Shades of the CIA’s MKULTRA program (that never really
ended) and the film, “Parallax View”….

Who’s involved?…what do they have to gain by ‘X’ happening?
What about ‘X’ is being overlooked or ignored..especially on purpose?
(‘Las Vegas Shooting’ anyone…funny how quick that incident was
disappeared down ‘the memory hole’….)
ALWAYS follow the $$$$$$$$$!

NEVER accept at face value what the parasite classes’ controlled
media vomits out to you, expecting you to accept without question.

For some reason the link to the article about the parents
catching the fbi plotting to force their mentally ill son to
be a patsy for them (the fbi) didn’t post.

You’re crazy. The simplest explanation is likely closest to the truth: a mentally ill man open fire in a shopping mall, a fast thinking hero shot him down.

Realist,
Obviously, you still watch ‘the shiny box’ and believe whatever
it ‘zinc shoots’ into your eyeballs and ears without question.

One has to wonder if you’re wearing kneepads and taking the
knee in abject supplication to it while it happens….

Bet you also lined up while wearing a facepanty to get your
‘approved’ cov-idiot 1984 “vaccine” so you wouldn’t be at
risk from ‘the ‘Rona’.

Obviously, thinking outside the box and doing independent research
or thinking is just too hard or scary for you…especially when it may
threaten your worldview.

That’s ok. Hope you like being either a emotionally triggered NPC or sheepie
as that seems to be what you are most comfortable with.

Oh, and btw, I seriously doubt that you are qualified to discern
or diagnose who’s crazy and who isn’t in any meaningful manner.

Obviously Dweezil and 18 other readers here disagree with
your assessment, for what it’s worth.

I wish there was a surveillance video. I’d love to see it!

Wether or not he was legally licensed is irrelevant. He saved lives! 😉

We all saw how those brave cops handled it in Tx with all those school kids dead and teachers. 21 dead and over 400 cops and waiting over an hour to save those children who were slaughtered.

When seconds count, the police are only minutes away.

First of all that is damn good shooting. So the perp killed three people in that short interval before he was put down? That is pretty quick actions for all concerned.

The local news just ran this story. Not a single mention of the bystander hero. But, plenty of kudos to the 1st responders talking on their radios.

Were they huddled around a sanitizer station?

40′ with handgun … very good shot. Under stress
And thanks for doing so

The fact is, whether you like it or not, it is impossible to remove guns from American society. The most draconian confiscation effort that even the most ardent progressive could devise would still leave millions of guns unconfiscated. Rational citizens of the United States should always be prepared to defend both themselves and innocent bystanders, which is what this law-abiding citizen did. Period.

Now we know people kill people…
In a good way…with a gun.

He needs to go to uvalde police station ,walk in and drop his pants and show them what a set of nuts look like

Why didn’t 400 cops in Uvalde who stood by while 21 were slaughtered, do what Elisjsha did in 15 seconds at the Greenwood Park Mall? How do these 400 cops & Michale Byrd who shot & killed Ashli Babbit, get away with it, but 69 yr old grandma Trump supporter, with cancer, gets thrown in prison.
https://www.eutimes.net/2022/07/inhumane-injustice-judge-sentences-cancer-patient-grandma-to-prison-over-attending-6-january-protest/

Like the rest, looks like Antifa. The media needs to explore that this is likely Antifa’s next phase of their war on America, guerrilla operations.

The more people with guns the more polite society would be. 🇺🇸

This young man is definitely a hero. I hope that the left do not go after him for his act of bravery. How proud his family must be of him and how thankful the people who were spared must be. No one knows how many lives were save that day.

I am proud of him!

Without reading the replies I will say that that’s the way to carry. Out of sight but if needed, in mind. I wish we could all know when it’s really needed like he did. And did his best to make it short and Sweet. Might be only 80% shit rate but it was over 175% effective. Way to be the outstanding citizen you was Sir!

It was pure sacrifice

From other such incidents I’ve read about, 80% is damn good; under pressure like that, most people can’t shoot straight. Dicken obviously practiced and knew how to handle his weapon (the true meaning of “gun control”). It also illustrates the fact that even when you shoot someone, it takes a while for them to drop, which is why trained officers never stop paying attention to the person until they are certain they are neutralized.

My FFL is also the range instructor for the local LE. He said most LEO only have a 27% hit rate on target. That’s not under stress. Just trying to hit the target that’s not shooting back. Pathetic.

I’ve read multiple accounts of this incident, and have yet to read if they ever found his lungs.

According to biden they were in the next county over.

Several years ago, interviews with prisoners convicted of violent crimes said they weren’t afraid of the legal system. The only thing they were ‘afraid’ of was being shot in the commission of their crimes.

Shortening the fame and glory period of these losers to seconds, in this case 15 seconds, instead of minutes or days or weeks or more is the solution. Which makes the armed citizen the solution.

And more people paying attention in 4th grade English so that they know that the apostrophe indicates a possessive not a plural.

Will correct punctuation save you in a gunfight?
Descriptive nick-name?

My pet peeve is when people say “fustration”. It frustrates me so very much!

That’s all you have? What a Zero.

Never start a sentence with “And”.

And what are you going to do about it? 🙂

Of course you are correct but unfortunately it is in the common vernacular these days.

That’s a huge irritation to me as well, however, much of the issue is the stupid spell check that automatically puts in apostrophes. I also understand that the misspellings that we see are due to our abysmal public fool system. I’m an old fart and, compared to when I was in school, kids have been not been taught what is or was their right to learn. I noticed those changes while I was in junior high school with younger cousins. Appalling. Maybe take a step back and reassess?

Spelling, punctuation and grammar are no longer being taught in 4th grade (or any grade) because English is not woke.

Education and testing, not just English, is racist, classist, and Euro-centric. There is no right or wrong, no norms, no natural law. Everyone makes up their own rules–and civilization decays.

That’s what you retards get from this story is how people spell? Really how about a pat on the back to the young man who took out a BAD GUY WITH A GUN.

That quite frankly is probably the correct assessment. I work in higher ed and I see the debris that K-12 leaves in its wake everyday. Bright kids hampered by unformed skill sets because the system failed them.

The Important thing here is,

That these Ass-holes now know that there existence will be short, and the attention will go to the Hero’s not them;

his picture should not be published, they should know there nothing for them, no Pic, no history, no story, no infinfany.

States should also re-institute public hangings. Lets make the message loud and clear, you Fup you will stop breathing.

I wonder if “The View” will have him on as a guest?

Award Him the Medal Of Freedom!

Take it medal away from Rapinoe or what ever her name is. Turn it into a pottle opener or some thing useful.

I hope this hero is given a guest appearance next season on Chris Pratt’s “Terminal List”. That’s some badass grouping from 40 yards away! Imagine how many would have died without the passage of Constitutional Carry. Wonder if he had a cookie in his mouth at the same time?

Hundreds of hours playing Call of Duty finally pays off..

You can bet that punk wasn’t expecting a response like that. He no doubt believed he was in a gun free zone and wasn’t going to face any armed response soon.

He picked his own store to die in.

Gee, I wonder when Biden is going to award him with the Presidential Medal of Freedom?

Right after he sniffs his hair

Wonder if he spends time around the WH

Wonder why no one is asking why the perp tortured animals and the adults just figured he would grow out of it?