Thousands of Africans Ransack Italian Cities While Chanting ‘We Own Europe’… |

Thousands of Africans Ransack Italian Cities While Chanting ‘We Own Europe’… 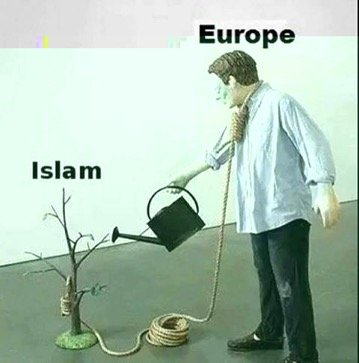 There’s a reason this kind of thing doesn’t happen in Texas, and it’s not because we don’t have so many “migrants”.

The gangs are organized and have the advantage of numbers. If the natives don’t get organized, and equip themselves with blunt instruments (their government doesn’t allow them to own effective arms), then they can only expect this to get worse.

These could have been predicted they open up there borders years back ,now they reap what you sow, where are those politicians let these happen now !

Round ’em up and send ’em home.

Where’s the mafia when you need them.

Be careful who you invite into your home.

A new black pope will give them amnesty in Vatican City.

Unless the residents are willing to stand up and defend these towns, this will continue. These mobs appear to be too much for the cops, who likely have their hands tied anyway.

Sic the Mafia on ’em.

And no guns to defend themselves and their families.

Why should we support you, Paul Joseph Watson? The die is cast. There’s no use and no turning back. The death of western civilization is upon us.

It’s all.part of “The New World Order” the elites in the government’s want.

Got a 2 day ban on FB for sharing this. The fall of Europe is being sensored. You do realize we are next. The mass migration has one purpose. Order out of chaos. The chaos is coming.

the wisdom of diversity and the beauty of immigration. how wise. how natural. now for the real deal…

PJW doesn’t seem nearly as angry about this as he should. Seems like he’s kind of enjoying this news.

He is probably growing numb because he covers it almost weekly for at least 4 or 5 years now, him, black pigeon speaks, Jared Taylor, Vince of the red elephants and numerous others that I can’t seem to remember their names of off the top of my head. Anybody that is paying attention sees what’s going on across Western Civilization. Mass migration of people that do not share a similar culture are infiltrating the west even though a majority of citizens in any given country do not want this the politicians keep pushing it I am pretty sure it’s part of the world economic forums plan to turn us all into serfs… Because according to them North America, Europe and Australia are the biggest polluters by far and yet they’re pushing for a populations to grow a little ironic…
Sorry I’m ranting I will shut up now.

After they get rid of U.S. they can chop all the power and resources then starve everyone of these useful idiots.

The pope likes these immigrants—they should go to Rome and stay with him. 🤔

They need to pitch Frankie out of his digs and into the street. No use in wasting money. on him. Also, they need to occupy the Vatican and burn it down. Frankie has destroyed a 2,000 year old church.

The mayor of Palermo, Leoluca Orlando said: ‘In the past, when the Mafia was more powerful, it prevented any immigrants from entering the city. Until I was 30 years old, I never saw an African or Asian in Palermo.”
Consequently Italy and Europe were also protected.
“The police targeted the Mafia’s activities while leaving African gangs alone.”
The Sicilian Mafia was simultaneously targeted in the US allowing other gangs to gain power and destroy the US from within.

That last paragraph is a quote from John Gotti

Same in the U.S.millions pouring into our border. Planes and buses distribute them all over the U.S. Any question? then you are a cruel racist…Thank Bidet…but NPR is a garbage, disgraceful state media especially…Joel Rose (another yid)
defending this chaotic influx of who knows what!!!!!

Everyone here thought bussing these parasites to DC was a golden, Mensa level idea. I said “are you all dumb??” And of course I was attacked.

Nobody (no mere citizen) would ever, ever need a semi-automatic rifle. They should simply allow themselves to be culturally enriched to death by invaders bent on TAKING EVERYTHING for their own selves…substituting their own ‘cultural values’ common to where they, or their parents came fled from — in search of a better life(?)

If you disagree that’s proof enough that you’re one of those racist, bigoted xenophobes. How can you be so selfish?

Diversity is Our Strength. The New Peace is Their Peace (YOU must “share”) At You’re Cost.

Don’t like that? Do not dare utter word of complaint —or else be banished –out-of-sight, out-of-mind (after having being systematically reduced to defenselessness & poverty)

it’s for your own good.

mRNA vaccines are good for you! they’re “safe” and don’t forget — “effective”!

Would government lie to you? How could you DARE think that? People are watching, you know?

For daring to say out loud what you have been led to think (led to think by evil conspiracy theorists!) the safest thing for everyone (including YOU) is to be quarantined far away from the sensible, rational, Science Believing peoples who just so happen to vote for the political Party that values, cherishes & protects “democracy”. Which is the opposite of YOU.

You are an “enemy of the revolution people Democracy.

In your absence your home and property will be cared for/managed by government agencies.

All those immigrants (who unlike you, value Our Democracy and Rule Of Law!) deserve a house to live in. It’s their Right.

When in Italy, accent is virtually always on the first syllable. (MI-lan, BREscia, BERgamo)…

Me, I’m black, and I’d deport every one of those bastards. Africa is a huge continent, rich with possibilities. Let them go back to Africa and make something of their country and themselves. Europe or any other country is for those who enter legally and can respect the laws and customs.

I love it how we fall all over ourselves whenever somebody black says some common sense thing we all agree with. Fifty one up votes is up there with the highest. I’ve dropped some gems and I’ve never even approached 51. I guess from now on, I’ll preface each comment with “as a black man,” and watch the thumbs go up. LOL

Muslims are opposed to all things libs love…but, the libs hate Christians so much, they’ll take the muslim side.

Don’t feel sorry for them. They invited these low lifes in

The people didn’t. Their terrible politicians did

Actually, that too, is very much in doubt.

There’s plenty of stories and photographic evidence of dumb white bitches handing them food, water and clothing as they slthered out of their landing crafts on the beaches.

Yeah the politicians let’s them in, but funded their travel, their food, their motives, their living conditions….all with the NON-politicians money.

The quran cult has meant it for 1,400 years but the moronic lefties think they are kidding … read the quran you fools . It states over 100x to hurt or kill infidels. Read it if you can find a single copy in English . I dare you !

Because diversity is a strength.

The locust are swarming again. May through September is their season.

Where ever they go, it never changes. Big Corporations love to support burn, loot and murder.

The Europeans invited them in, what did they think was going to happen?

Kumbaya. What else makes any sense at all?

Our females have betrayed us. Nation-wreckers!

Greitens IS a RINO! Do the research. He’s a graduate from the WEF Young Global Leaders, as every vile globalist leader is! Stop looking at the show he puts on and examine the man.

Someone said they’ll do it here next. I said they have been since the 60’s! Europe has gotten along with blacks while we haven’t.

We’re doing it now through the southern border