Man who slapped Macron gets 4 months in jail… |

Man who slapped Macron gets 4 months in jail…

JUST IN – President #Macron slapped in the face during #France tour.pic.twitter.com/Zcu0N4lk3C

That was quick. Ruling handed down today.

A medieval combat enthusiast has been given four months in jail after slapping French President Emmanuel Macron. Damien Tarel told the court it was an act of impulse, but the prosecutor said it was a “deliberate act of violence.”

The court heard that Tarel subscribed to the yellow-vest movement.

President Macron said the attack should not be trivialised but had to be kept in proportion.

He had just left a hotel school in the south-eastern town of Tain-l’Hermitage when he ran towards a crowd waiting behind a metal barrier. As he slapped the president, Tarel was heard to shout “Montjoie and Saint-Denis! Down with Macronism” using an obscure medieval battle-cry.

And it is worth every bit of the 4 months of time spent in jail.

I cringed when I saw Macron (Group B) slapped. When people no longer pretend to respect these leaders, anarchy and chaos ensues

4 months? They should give him an award and some money. F macron, what a twit he is.

I only wish to God he would have knocked his teeth out of Macron’s punk ass mouth. And that fag from Canada as well.

It would have taken over a year to convict Damien in this corrupt lawyer-burdened nation.

Should have used a closed fist for 4 months.

Here the Secret Service chats with them and they say it was just a joke. Or is that only under a Republican administration?

what chicken shit bastards! I hope Justin and that Judge see their demise quickly!

Wow, here in the states you can burn down a church and a police precinct (with officers inside) during a peaceful protest with impunity.

How can we add money to his commissary book?

You mean on all four cheeks

Look at the French making the Americans and British and everyone else look weak and pathetic.

That was some swift justice.

Only 4 months? Calling all French patriots, keep it up!

You know the US is F’d up when people in France are saying we’re too woke.

Lucky he wasn’t shot. That’s what happens in other democracies like China and North Korea.

That might have happened if he tried crawling through a window

Yet others sentencing go on and on and on…

Give that man the Charles Martel award.

Harm a righty, you get applauded, or slapped on the wrist and released. Smack a lefty, go to jail. Tolerance, peace, and love strikes down yet another.

He will be treated like a King for four months,
He will be applauded upon entry for doing what they all want to

The guy should have said, hey macaroni:

Can we get a Canuck to slap Justin Trudeau also? Asking for a friend.

Of course he won’t get the Medal they promised him…The French are SO Effed up!

I’d take four months if I could slap KamalToe

4 months in jail and 10 million in GoFundMe contributions. I’d take that. Where’s pelosi?

The bish slap heard round the world.

i cant believe this! ! !
the perp got away with a slap on the wrist

He slapped him like the little bitch he is 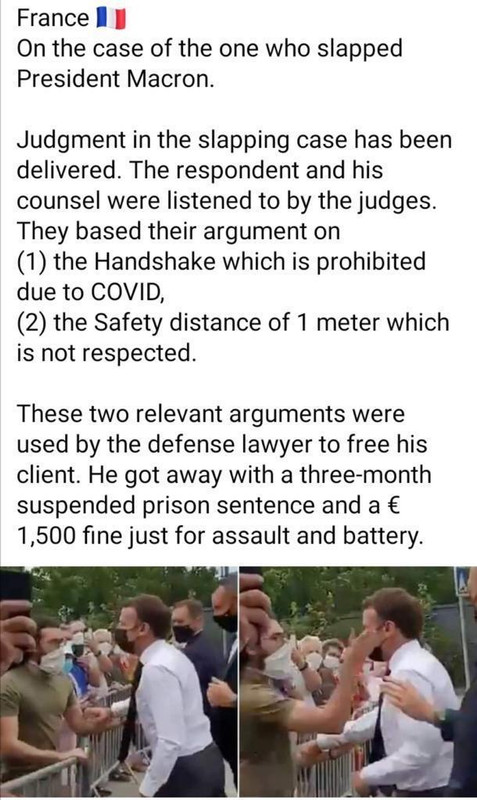 Macronroni is such a limp noodle.

I guarantee that had he slapped anyone else, he wouldn’t be required to spend a day in jail.

He deserves a medal, not punishment.

I dream of doing that to most dems in washington along with a bunch of repubs. Love the way the people laugh at it. Serves the trout right.

I’d have broke that a.s.s, holes nose. Make a fortune in the talk circuit and book sales.